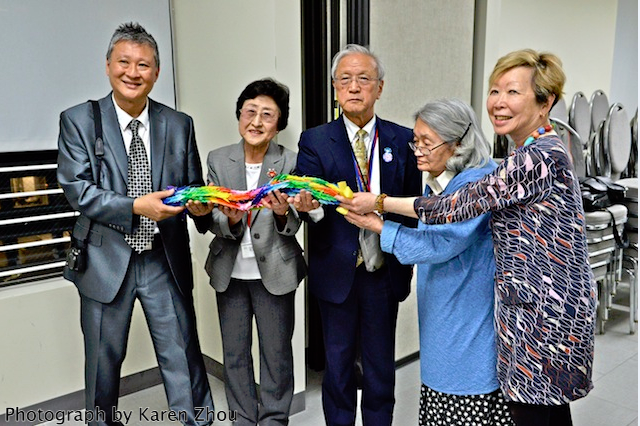 Photos and story by Karen Zhou

As part of the 70th anniversary of the atomic bombings in Japan, three Japanese American groups in NYC (Japanese American Association, Japanese Americans & Japanese in America, JACL-NY Chapter) organized “Hibakusha Speak Out”. The organizers had two special guests, Mr. Tamotsu Sanada and Ms.Kodama Michiko, who are atomic bomb survivors or Hibakusha. They are with the group, Nihon Hidankyo, which is the only national organization of atomic bomb survivors of Hiroshima and Nagasaki in Japan. Since its founding in 1956, Nihon Hidankyo has worked for a total ban and abolition of nuclear weapons advocating for “not creating another Hibakusha again”.

The Hibakusha are in NYC for the 2015 Treaty on the Non-Proliferation of Nuclear Weapons (NPT) Review Conference. Since many Hibakusha are in their late 70s and 80s and traveling is getting harder for them; this may be their last visit to NYC. At the event they shared stories which included when the atomic bomb was dropped, what their family/friends went through, what happened afterwards and why they decided to speak out.

Mr. Tamotsu Sanada was the eldest son in a family of four kids raised by a single mother. He was 7 years old at the time when the atomic bomb dropped. He was playing with his younger brother and a 4-year-old relative in the streets. When the blast occurred, there was a loud bang and then fired started among the collapsed houses. Because Mr. Sanada and his brother were in the shade, they somehow survived without burns or visible injuries. Unfortunately, their 4-year-old relative who they were playing with suffered burns all over his body and passed away a few days.

Ms. Kodama Michiko experience was equally as emotional. She was also 7 years old and at the time was in second grade primary school. When the atomic bomb hit, she saw an immense flash and ceiling of the wooden school building collapsed with glass from the window scattered all around. Her father managed to go to her school and find her. They witnessed what she called “hell on earth.” She saw people with skin hideously burnt and peeling off and a mother heavily burnt all over her body, carrying a baby who was burnt like charcoal. Some people’s eyeballs had popped out, while others were trying to escape holding their own protruding intestines in their hands. People were shouting, “Give me water, water, water. . . .”

Ms. Michiko’s dad managed to get her home but everything was destroyed. She saw “black rain” containing radioactive material fall inside their house. Two of her young cousins, ages 14 and 10 years old, passed away from severed injuries and health problems. Ms. Michiko would also get sick. Her hair started to fall out and her parents did everything they could to save her. Later her parents died of cancer but she survived and is extremely grateful for her parents’ love.

In later years, both Mr. Sanada and Ms. Michiko felt stigmatized by society for being a Hibakusha. Mr. Sanada says, “I was was treated as if I were contagious and should not get close to my classmates.” Each had difficulties finding both work and marriage partners.

Despite facing discrimination, Mr. Sanada and Ms. Michiko found partners of their own and were able to get married. Mr. Sanada’s baby was born premature; while Ms. Michiko’s daughter developed cancer and passed away. The loss for her daughter was really painful.

The Hibakusha’s mission is to convey peace. Speaking in Japanese, Mr. Sanada urged the audience, “let all the souls here rest in peace, we shall not repeat the error” to the deceased victims of Hiroshima and Nagasaki. . . Let us work together.” Echoing that message, Ms. Michiko summarized by saying, “to our ardent cry for no more Hibakusha!” Let us take a bold step forward to a world without nuclear weapons.”