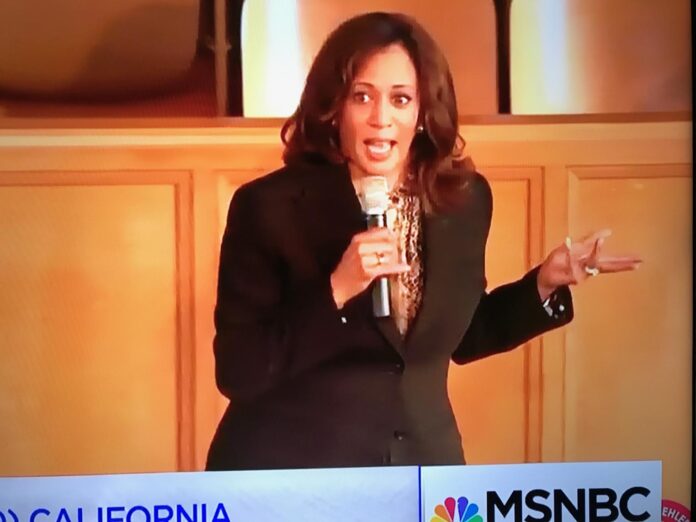 SHE WILL DENY it, but, U.S. Sen. Kamala Harris, D-Calif., sure looks like she is planning a run for president in 2020 when she told a crowd of mostly liberal activists that she plans to co-sponsor a “Medicare-for-all” bill that would create a national health insurance system.


By taking that stand, she pivoted away from the “moderate” image pushed on her by mainstream media and stepped left towards Sen. Bernie Sanders’ fervent supporters.

Speaking in an Oakland town hall Aug. 30, Harris, who is part South Asian and African/American,  surprised her audience when she announced,  “I’ll break some news: I intend to co-sponsor the Medicare-for-All bill because it’s just the right thing to do.”

After posting her plans on her twitter account, Sanders responded saying “Thank you @KamalaHarris for your support. Let’s make health care a right, not a privilege.”

Harris, California’s former Attorney General and San Francisco’s District Attorney, has been mentioned by several publications as a possible Democratic candidate for President in 2020. She’s a woman, a minority and her performance as a member of the Senate Judiciary Committee unnerving U.S. Attorney General,Jeff Sessions raised her profile in the national media and impressed major Democratic funders.

In a letter to her supporters, Harris wrote:

Our country is stronger when everyone has access to affordable health care at every stage of their life, from birth on up.

It’s for that reason I announced this week at our town hall that I intend to co-sponsor Senator Bernie Sanders’ Medicare-for-All legislation.

This announcement is part of our nation’s ongoing fight to ensure health care as a right for every American, regardless of wealth. It’s just the right thing to do.

Supporting Medicare for All means no American will ever have to worry about living without health insurance because they lost their job.

Supporting Medicare for All means no American will ever have to worry about a pre-existing condition cutting them off from access to care.

Supporting Medicare for All means no American will ever have to live in fear that a sudden illness or injury could bankrupt their family or make it difficult to put food on the table for their kids.

At its core, supporting this legislation is about doing what’s right for the vast majority of people. That’s why I’m proud to co-sponsor Bernie’s bill. Can we count on you to join with us this week?

Giving her support to this bill gives her a national issue that can attract the more progressive elements of independents and Democrats who supported Sanders in his bid for President, all who expressed reservations about the California senator, who they saw as part of the moderate camp that ran the Hillary Clinton campaign.