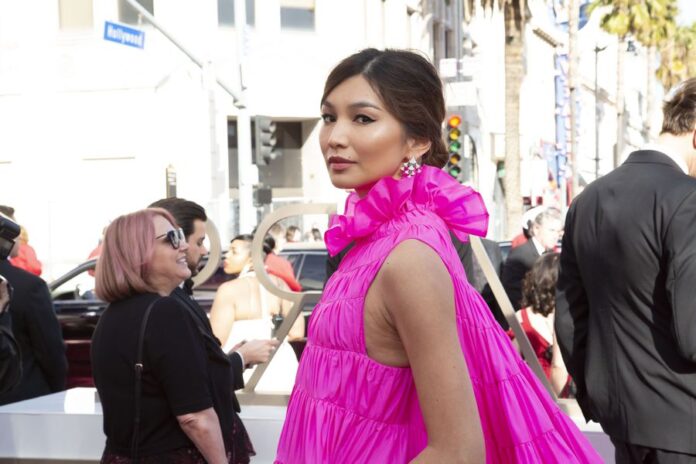 Gemma Chan’s star was already on the rise when she got the role of Astrid in Crazy Rich Asians; that landmark movie starring an all-Asian cast made her career skyrocket.

In January, Chinese Brit took the role of what would traditionally cast with a white actor. In a bit of creative casting, chan portrays Bess of Hardwick in director Josie Rourke’s diverse film Mary Queen of Scots.

She was chosen by Vogue’s guest editor, Her Royal Highness Duchess of Sussex (Meghan Markle) for the cover of the September issue of that magazine’s British publicaiton.

“I know the perception is that it’s got a lot easier to make films by or about minorities or women, but it’s actually still difficult. I would like to see a real increase in the diversity of people who are in a position to make decisions,” she tells Vogue.

“When you think about who actually has the power to get a project green-lit, it is just a handful of people in Hollywood, and even fewer of those are women, or people of color or other minorities,” she says. “Until we address those systemic imbalances all the way up the chain, we’ve still got a lot of work to do.”

In Maarch, Captain Marvel was released in which Chan was cast as the blue-skinned mercenary Minn-Erva. Recently Chan reportedly signed on to a yet-to-be identified role in Marvel’s The Eternals earning the distinction as the only actor to be cast as two different characters in the Marvel universe.

Between movie assignments, she was able to take part in Channel 4’s I Am series. In I Am Hannah, she plays a woman in her mid-30s who reaches a crossroads in her life. Facing impediments both within and beyond her control, Hannah is confronted by a crisis of aspiration and identity.

Channel 4 is the British equivalent of our Public Broadcasting System with some differences. Channel 4 was set up by the government with a unique model that aims to stimulate the independent production sector, drive innovation in broadcasting and to commission programs that showcase Britain in all of its diversity and to stimulate debate.

Channel 4 was set up with a unique ‘publisher-broadcaster’ model, meaning that it does not have any in-house production, but instead commissions content from production companies throughout the UK.

Unlike PBS, Channel 4 is a self-sufficient business that reinvests all profits back into programming, at zero cost to the taxpayer. A ‘Robin Hood’ model of cross-funding means programs that make money pay for others.

Chan realizes that “Crazy Rich Asians” has opened doors for herself, a door that she wants to keep open for others, Chan added that she does not want to be “the only successful Asian actress or British Asian actress.” Towards that end, she has launched her own production company.

“I’m sure there’ll be many obstacles but I just feel like I don’t want to squander this opportunity, like, oh, we’ve done this amazing film and that’s it for another 25 years,” Chan said. “I want the opportunities to keep coming.”

“I’m very interested in developing stories and going into producing things that are not necessary for me to act in,” the 36-year-old star said, according to the South China Morning Post. “And it’s about finding those. Stories that haven’t been told that have been lost to history.”