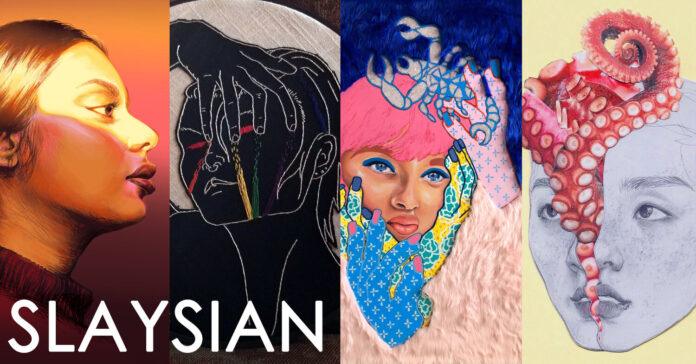 As xenophobia and anti-Asian sentiment persist throughout America, it can be difficult for Asian Americans to find comfort during the coronavirus pandemic. A new virtual art exhibit called SLAYSIAN is helping promote solidarity with the Asian American community.

SLAYSIAN, which features art from 39 Asian American Midwestern artists, was originally meant to open at a gallery in Chicago on March 20. Now, the artwork from the exhibit is available as a virtual gallery online.

The exhibit was curated by 32-year-old artist and independent curator Jenny Lam, who grew up in Chicago and began creating art at an early age.

“I pretty much always say I was born an artist,” Lam told AsAmNews in an interview.

In 2005, Lam moved from Chicago to New York City to study studio art at Columbia University. While living in New York City, she developed a passion for contemporary art and curating. She ran a student gallery called Post Script.

After graduation, Lam moved back to Chicago and started her own independent curating practice. In 2012, she curated an exhibit called I Can Do That. The exhibit featured pieces of contemporary art with supplies in front of each art piece. In 2016, she curated an exhibit called Lexicon, where she displayed pieces without artist statements. Viewers were encouraged to write their interpretation of the art on a Post-it note and stick it next to the piece.

Lam “felt it was time” to create an exhibit for Asian American artists in the Midwest.

“I’ve always been proud of being an Asian American in Chicago,” Lam said. “I think being in the Midwest and being a part of this group is kind of different, and I wanted to kind of create a show that celebrates our culture and our identity.”

In early 2020, she put out an open call to all Asian American artists in Chicago and the Midwest. She was amazed by the response she received and impressed by the amount of diversity.

Like Lam, 24-year-old Korean-Canadian artist Joyce Jodie Kim began making art at a young age. Kim told AsAmNews in an interview that growing up her family had little. Extra art lessons were out of the question. Kim, at the suggestion of her father, practiced her art at home. She went on to study drawing and painting at OCAD University in Toronto.

Kim frequently uses paper mache wearables in her art. Her use of paper mache is inspired by her mother who would use her own recipe of flour and water to create paper mache toys for Kim and her sister.

For 26-year-old Chinese American artist James Gu and 32-year-old Filipino American artist Julius Bautista, art wasn’t always a part of the career plan. Gu, though he had been drawing from a young age, studied business at the University of Texas at Austin. During his senior year in 2015, Gu was experiencing the end of a long relationship. He began channeling his emotions into drawings.

“I made this drawing and it was actually really therapeutic,” Gu told AsAmNews in an interview.

Bautista joined the Marine Corps as an engineer after graduating from high school.

“I would say i was a bit passionate and sensitive and in that regard. I wasn’t a great match at the time for what i was doing in the military,” Bautista told AsAmNews in an interview.

In college, he decided to pursue a degree in Fine Arts.

Many of the artists submitted pieces that reflected their own personal experiences and emotions. Gu’s ink and charcoal drawings explored his relationship with melancholy. Bautista’s painting I Still Remember explores his own experience with grief. The small shadowing figure behind the portrait of the male subject is an expression of that grief.

“That was me dealing with someone I had been close with in my life but had been estranged from suddenly passing away,” Bautista told AsAmNews in an interview.

Like many other artists in SLAYSIAN, Bautista’s work also reflects on the world around him. The three paintings he submitted attempt “to brighten otherwise dismal narratives” with lots of saturated color. His work also offers a critique on art and capitalism.

“I would like for creative types especially to be more considerate of what they’re articulating and why and not so much be driven by commercial, capital need or economic need,” Bautista said.

Much of the artwork also explores aspects of Asian American culture. For many artists, exploring their Asian American identity in their work didn’t always come naturally. Kim, who is Asian Canadian, says in Canada artists are heavily encouraged to explore their cultural backgrounds. Although she has only lived in Chicago for one year, she said she noticed that Asian Americans seemed to be told to blend in.

Lam strives to ensure that her curated exhibits are interactive. She wants to create art exhibits that attract people who might be too intimidated to walk into a gallery or museum. Her previous exhibits, I Can Do That and Lexicon, were interactive.

SLAYSIAN is not as interactive as the previous two exhibits, but it still contains several performance art pieces from artists like Kim and Thien. The virtual exhibit limits the expression of their pieces.

Kim’s submission includes a video of an aerial silk performance called The Stories of the Sensitives. She planned on making her own exhibit interactive by standing next to a projected video of her performance wearing paper mache wearables she created. She would ask those who asked her questions where they felt sensitivities and use body paint to paint those sensitivities onto their hands.

“I personally don’t like wall art because I can’t touch it,” Kim said. “I can’t wear it. I really want it to be a part of me.”

Kim said that about 50 percent of her piece is interactive.

Tien had planned to do a live poetry-reading of her submission Next in Line, which details their relationship with their Vietnamese heritage. They wrote the poems out on yellow and red Post-it notes and assembled the notes into a 3-D version of the South Vietnamese Flag, pre-Communist takeover. The pictures of the flag don’t quite capture the different layers.

“I think that image, that flag is ubiquitous in Vietnamese homes because so many of those folks who came here fled the communists,” Tien said.

Although the essence of some pieces cannot be captured by a virtual exhibit, Lam says the online platform has given her limitless wall space. She has been able to post bonus pieces and share links to the artists’ websites and social media accounts.

The virtual exhibit also provides Asian Americans with a positive during a time of rampant xenophobia and anti-Asian racism. Kim said she was proud of Lam for “creating this wonderful opportunity” to build Asian American solidarity.

Tien believes it’s important for artists to continue creating safe spaces. They continue to post poems and create art for the vulnerable populations they work with.

“I think of all the queer youth who may be sitting in an unsafe house and are stuck there because of Covid-19,” Tien said. “We still need to find ways to reach them and make them feel connected some way.”

The artists also expressed their gratitude to essential workers and front line workers.

“I think in general I was really impressed with the wide range of art…” Lam said. “ I loved the diversity within the group, diversity within backgrounds, age range, experience levels. I had people who had never been displayed in a gallery before.”

To view the exhibit in full, visit Jenny Lam’s website.