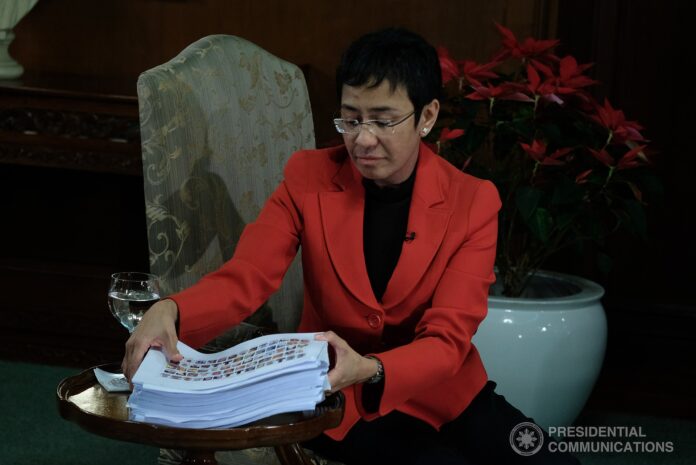 A Filipino American journalist who helped establish Rappler, a news website in the Philippines, has been found guilty on Monday of cyber libel charges and could face up to six years in prison.

Embattled Ressa, one of four journalists named Persons of the Year by Time Magazine in 2018, denies the charges and called the proceedings a politically motivated effort to silence independent journalism in the Philippines.

Also found guilty was Reynaldo Santos Jr., a former researcher and editor for Rappler, which was found not guilty even though it has often offered reports critical of policies of the administration of Philippine President Rodrigo Duterte.

After the verdict, Ressa told the BBC, “Rappler and I were not the only ones on trial.”
“I think what you’re seeing is death by a thousand cuts – not just of press freedom but of democracy.”

She and Santos remain free as the case is under appeal.

After Ressa and Santos were arrested in February 2019, the United Nations High Commissioner for Human Rights issued a statement that said Ressa’s treatment “appears to be the latest element in a pattern of intimidation of a media outlet that has fiercely guarded its independence and its right to conduct in-depth investigations and to criticize the authorities.”

Like strongman leaders around the world, Duterte doesn’t take kindly when he is taken to task by the press. He often calls critical news reports, especially from Rappler, as “fake news” and calls journalists “spies.”

“Just because you’re a journalist you are not exempted from assassination, if you’re a son of a bitch,” Duterte warned. “Freedom of expression cannot help you if you have done something wrong.”

The Philippines’ constitution guarantees freedom of the press the Philippines is one of the most dangerous places in the world for journalists, says US-based Freedom House.

Last month, one the country’s biggest TV networks, ABS CBN went off air after it was ordered by the government’s media regulator to stop operations while waiting for the renewal of its broadcasting license.

“It is time for the UN to urgently open an international investigation into the country’s human rights crisis, in line with the recent conclusions of the UN Human Rights office itself.”

“The silencing of critics and the attacks on the media have been going on for 3 years now. And unless we stand up, speak out, and vigorously oppose the tyranny in our midst, their conviction will not be the last,” said Philippines Senator Francis Pangilinanthe president of the once-ruling Liberal Party said in a statement.

Ressa was born in the Philippines but was raised in the US . She holds dual citizenship of the US and the Philippines. Ressa returned to the Philippines in 1981 after the fall of the Ferdinand Marcos dictatorship. She worked for CNN-Philippines before forming the independent Rappler.
“I think we’re fighting the same battles that journalists all around the world are facing against populist authoritarian leaders that are hitting the messengers,” said Ressa.