HomeAsian AmericansAsian Art Museum removes bust of former patron accused of being a... 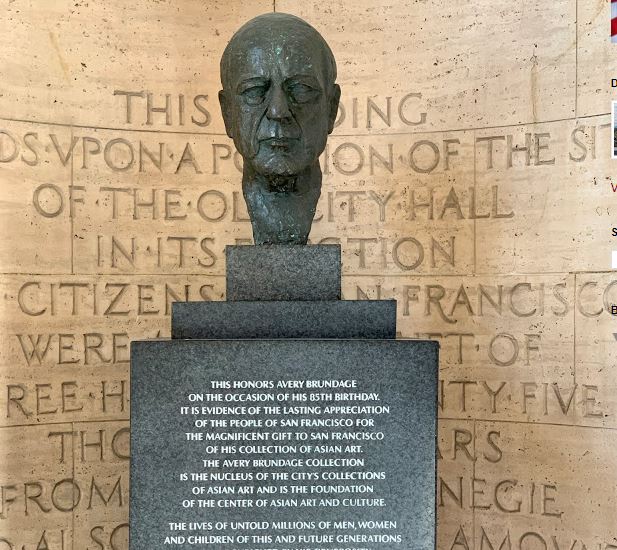 A bust of Avery Brundage, whose Asian art collection formed the basis for San Francisco’s Asian Art Museum, has been taken out of its place of honor near the museum entrance and put out of sight in storage.

Brundage, an industrialist and former president of the International Olympic Committee, had collected nearly 8,000 art pieces, which were donated to the city on condition that the city build a museum to house the collection.

Despite his charitable work, Brundage’s reputation has been tainted by accusations that the art patron was also a Nazi sympathizer and a White supremacist.

The museum’s director and chief executive, Jay Xu, announced the decision at a meeting of the board and commissioners. And that may be only the start as the museum struggles to respond to “a society structured around White supremacy.”

In a letter to the public in response to increased pressure on institutions to reassess their racism — spurred by the global anti-racism protests sparked by George Floyd’s killing by Minnesota police which raised questions about the validity of monuments honoring colonial and racist legacies — Xu wrote that Brundage “espoused racist and anti-Semitic views,” and that the institution “must contend with the very history of how our museum came to be.”

Brundage, who died in 1975, opposed boycotting the 1936 Olympic Games in Berlin and advocated for the America First Movement. The industrialist also pushed for the expulsion of African American athletes Tommie Smith and John Carlos from the 1968 Olympic Games after they famously raised gloved fists in solidarity with the Black Power movement during the medal ceremony.

Xu announced at a June 10 meeting of the board and commissioners that Brundage’s bust removal may be only the start of an overall reassessment, citing that the museum’s collection “reflected a fetishization of the ‘Orient’ that was common with White collectors of the times.

The Asian Art Museum, which opened in 1966, houses the largest institution of exclusively Asian arts in the United States, attracts 300,000 visitors annually and has a $30.8 million budget. It has a $56 million endowment.

The museum’s staff is 50% White, 27% Asian, 12% Latino and 7% black. (Some people identified as two or more races.) About half of the board are Asians and Asian Americans, and 73% of its curators are Asian and Asian/mixed race. “We certainly recognize that there is always room for improvement,” Xu said.

Jeff Kelley, the museum’s consulting curator for contemporary art from 1998 to 2008, told the New York Times, “In this time of toppling statutes, it’s not surprising that artists and activists claim that the Asian Art Museum has been a preserve of wealthy industrialists who see ‘Asia’ as a misty colonial realm.” He added that the current debate helps move the museum “away from its Orientalist roots.”

He said that over many years, the museum has exhibited “a pattern of repeatedly exoticizing, hypersexualizing, playing dress up with Asian cultures.”

The museum’s recent original exhibitions include the popular “Lost at Sea: Art Recovered From Shipwrecks,” Philippine art — which Brundage never collected, art and electronic literature by Korean and American artists, as well as traditional arts from the National Palace Museum in Taipei.

If not for Covid-19, the museum would be celebrating the opening of its $38 million Akiko Yamazaki & Jerry Yang Pavilion, which was supposed to be completed this Spring. It was named after the Yahoo co-founder and his wife, who is co-chair of the museum’s foundation and the Asian Art Commission.