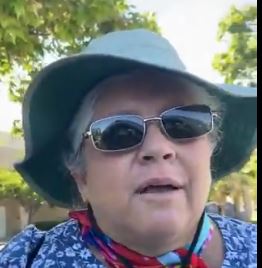 Lena Hernandez, pictured above, faces charges in an anti-Asian tirade caught on video

The resolution made a point to recognize the increase in xenophobic acts since the coronavirus outbreak and acknowledged that Torrance’s population is 37% Asian, according to Daily Breeze. Torrance is also home to the largest population of Japanese Americans in the country.

Kathy Masaoka, co-chair of the Nikkei for Civil Rights & Redress, said the resolution is a “good first step that will require time and energy to bring all people together in Torrance to help solve racial issues in a healing and constructive manner,” Daily Breeze reports.

But Southern California Asian American groups are pushing for more, according to Los Angeles Daily News.

The groups are calling for heavier charges against Lena Hernandez, the woman who verbally abused an Asian American family and woman respectively. Hernandez was arrested on unrelated charges.

“I also must remind folks that the First Amendment protects the speech rights of people — even hateful and vile words,” Furey continued.

Daily Breeze noted that Torrance’s City Council did address the demands for such a commission during its July 22 meeting.

“Creating a police commission would be an important step to move forward,” Kawai added.

AsAmNews has Asian America in its heart. We’re an all-volunteer effort of dedicated staff and interns. Check out our new Instagram account. Go to our  Twitter feed and Facebook page for more content.Please consider interning, joining our staff, or submitting a story.