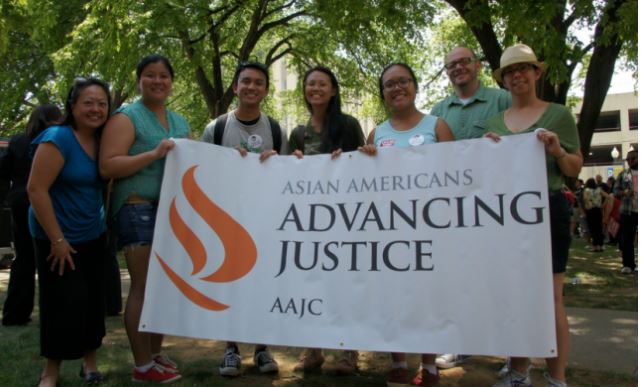 (Editor’s note: This post has been updated to include more information about the donation to Asian American Advancing Justice-AAJC. Some have questioned why we didn’t make Scott’s photo the featured photo. The only non-copyrighted photo we could find of her was a thumbnail which would have been distorted as a blown up featured photo).

The ex-wife of Jeff Bezos, MacKenzie Scott, announced this week a donation of $1.7 billion to 116 charities including Asian Americans Advancing Justice.

AAAJ is a national coalition of five affiliate groups under the Advancing Justice umbrella, but according to Asian Americans Advancing Justice-AAJC in Washington, DC, it will receive the entire donation.

Niether AAAJ-AAJC or Scott have revealed how much she donated to AAAJ, but in all, she gave $586.7 million to racial justice groups.

Advancing Just-AAJC is the only Asian American group included on her donor list, which she divulged in a blog on Medium.

“We, here at Advancing Justice | AAJC, are very honored to have received support from Ms. MacKenzie Scott,” the group said to AsAmNews. ” By accepting this contribution, we have agreed to not disclose any confidential information. Such information includes the name of the third-party, the amount of the grant, and other terms defined in the signed agreement.”

We have no special connection with Ms. MacKenzie Scott, and the contribution that we received was unexpected, unsolicited and it was coordinated by a third-party consultant, whose contact information we are not allowed to disclose. Unfortunately, we do not have the information you are seeking.

Scott’s estimated fortune is $38 billion and she has joined a group of billionaires in pledging to give a majority of her wealth “back to society.”

“What fills me with hope is the thought of what will come if each of us reflects on what we can offer,’ she wrote on Meidum. “Opportunities that flowed from the mere chance of skin color, sexual orientation, gender, or zip code may have yielded resources that can be powerful levers for change. People troubled by recent events can make new connections between privileges they’ve enjoyed and benefits they’ve taken for granted. From there, many will choose to share some of what they have with people whose equal participation is essential to the construction of a better world.”

The Bezos had four children together including an adopted girl from China.

“The organizations named offer a daily reminder that we can each carry more than we imagine. And they offer an opportunity to invest our good fortune in change, no matter what form our good fortune has taken,” she said.