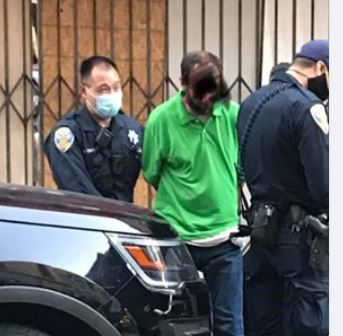 Members of a volunteer non-profit in San Francisco’s Chinatown encountered an angry racist Friday night while removing graffiti in the neighborhood.

Little did they know the man is wanted on an outstanding fugitive warrant.

Leanna Louie of the United Peace Corps said the man came up to her and called her a “Chinese virus” and told her to “go back to China where all the f***ing diseases came from.”

Louie said he wasn’t wearing a mask as mandated by current city regulations and got too close to her so she called 911.

When officers arrived, they recognized him as someone who has an outstanding warrant out for his arrest. Louie said the suspect is accused of skipping out on $1 million bail. She also said he was wearing an ankle bracelet.

Authorities took him into custody.

Members of UPC regularly patrol Chinatown and respond to calls for help ranging from medical issues to criminal activity. Its mission is to support the community and observe, record, and report any suspicious activities to authorities.