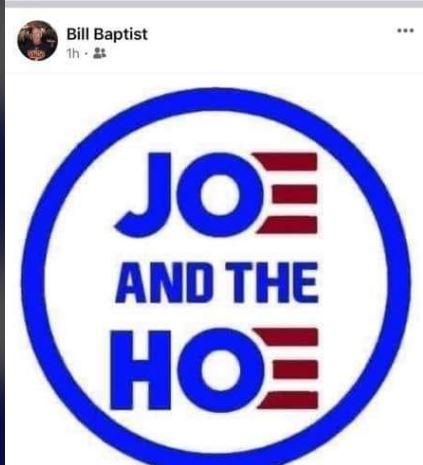 Baptist, who worked with the Houston Rockets for decades, posted an image that altered the logo of the Biden campaign to read “Joe and the Hoe,” according to BET.

Basketball Hall of Famer Sheryl Swoopes first brought attention to the post when she shared the meme with a stinging comment.

“So this guy works for the NBA but covers the Houston Rockets. Has been around for a while. Even worked for the Houston Comets. It’s amazing how people will smile in your face but eventually their true colors will show,” the Sports Rush reported Swoopes said in a statement.

According to USA Today, Baptist has been removed from the NBA bubble in Orlando despite an apology through a local Houston television station, calling his actions a “horrible mistake.”

“The phrase I posted does not reflect my personal views at all,” Baptist said, USA Today reports. “I sincerely apologize to all of those who have rightfully been offended and I have taken the post down from my FB page.”

The incident, however, is hardly slowing down Harris’ momentum. Politico reports that the vice presidential pick has been an “accelerant” to the Biden campaign, capturing the attention of younger voters and voters of color.

“[Biden is] a 70-something white male establishment figure and that is comforting to many moderate Democrats. Now, he has a ticket that looks like America and looks to the future,” Rose Kapolczynski, a Democratic strategist, said according to Politico. “It’s an invitation to younger and other occasional voters to get out and vote this time. Kamala Harris looks like change.”

In a pandemic where crowded political rallies are off the table, politicians are also contending with putting on successful virtual events, Politico reports.

“Tens of thousands joined a Zoom with President Obama and George Clooney, trading jokes about their barking dogs while also making the case for Joe Biden. I’d welcome much more of this, but now with Kamala,” Tracy Sefl, a former Hillary Clinton adviser said, according to Politico.

“Hearing from her and seeing her in action, close-up will play to her many advantages. … It may seem counterintuitive, but the virtual format adds intimacy and when done well, can truly create a sense of community,” Sefl continued.