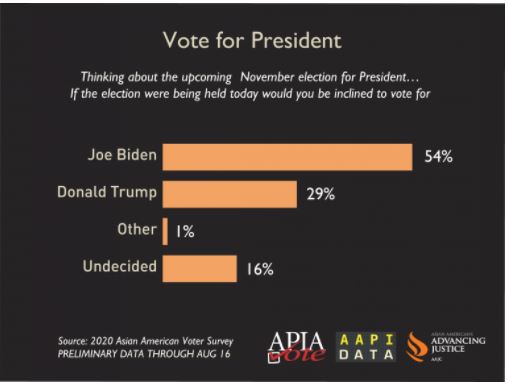 When the undecideds are removed from the poll, Biden’s lead increases to 65-34%.

More than half of all voters surveyed said they had not been contacted by either party.

“AAPI voters are poised to have an impact in several battleground states such as Arizona, Florida, Pennsylvania, North Carolina, and Texas, where they are considered a potential swing vote. However, their role in these states and across the country depends on turnout and mobilization,” said researchers Karthick Ramakrishnan and Janelle Wong in a blog post.

“Results from our early polling suggest that the vast majority of Asian Americans have not yet been contacted by either of the two major parties. About 56% of registered Asian American voters say that they have not gotten contacted at all by the Democratic Party, and the proportion is similar for lack of contact by the Republican Party.