3 decades of Keanu Reeves wrapped up in Bill & Ted 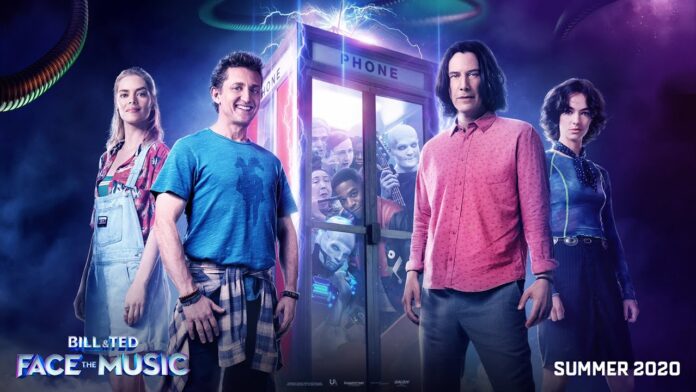 Bill & Ted Face the Music is an amiable comedy, that might not be excellent, but comes at a good time to remind us that “the best time to be is now” and we should be “excellent to each other.”

For the younger generation, who’ve grown up with Keanu Reeves as an action hero, the titular character of the John Wick series, Reeves as an adorable but not particularly bright musician might seem a stretch. Others will have the evolution of the dude from San Dimas to networking Neo to the dog-loving John Wick.

This is the third installment of Bill and Ted’s adventures. When we first meet William “Bill” S. Preston Esquire (Alex Winter) and Theodore “Ted” Logan (Keanu Reeves) they are high school students in Bill & Ted’s Excellent Adventure (1989). A man from 2688, Rufus (George Carlin), is sent back to 1988 to insure that Bill and Ted pass a history class so their fledgling garage band, Wyld Stallyns, will make music and a philosophy that will create a utopian society. Using a time machine shaped like a telephone booth, they gather historical figures and take them back to their hometown, San Dimas. They also get girlfriends from the 1400s to be part of their band.

25 years later, In Bill & Ted Face the Music, the Wyld Stallyns still hasn’t created the song that will unite the world. They thought they had with their number one song, “Those Who Rock” at the end of the second film, but they were wrong. Since their initial success where their band played at the Grand Canyon (montage from the second film), they’ve fallen so low they barely get paid. Their last gig was at the Elks Lodge in Barstow.

Because of Bill and Ted’s failure to produce the song that unites the world, time folds in on itself: Jesus at the Last Supper disappears and Kid Cudi replaces him. Babe Ruth (Reece Loustalot) disappears from a baseball field and ends up crossing the Delaware River in place of George Washington (William E. Harris).

Bill and Ted are still trying to create THE song and play their newest song at the wedding of their former babysitter, Missy (Amy Stoch). Missy was once married to Bill’s father (first film), then was married to Ted’s father (second film) and is now marrying Ted’s younger brother, Deacon (now played by Beck Bennett).

After the wedding fiasco, the princesses Elizabeth Logan (Erinn Hayes) and Joanna Preston (Jayma Mays) sign up for couple therapy. This ends up being a couple couples therapy with the foursome together. The therapist (Julian Bell) can’t quite triangulate the situation of real princesses, the bromance and time travel.

Here, it’s important to know that there is no time paradox resulting from future selves meeting past selves (as per Back to the Future). Even from the first film, Bill and Ted get tips from their future selves. After the therapy session, Bill and Ted are determined to please their princesses and are about to give up on their musical quest.

At this point, Rufus’ daughter, Kelly (Kristen Schaal), appears in a more modern time machine–a mod pod. She takes them to see her mother, the Great Leader (Holland Taylor) who gives them a 77 minutes and 25 seconds deadline to perform THE song at MP 46. The dudes decide to find their future selves and steal the song, because as Bill puts it: “How is that stealing if we’re stealing from ourselves, dude?”

Under the direction of Dean Parisot and lensed by Shelly Johnson, “Face the Music” retains the 1980s, early 1990s feel. Ted and Bill’s favorite number may be the sexually suggestive 69, but they still have this sweet innocence and are totally loyalty to their princesses and their own bromance. Both Reeves and Winter are convincingly dim, but dutifully honorable. There’s a lively contrast between the dim dude dialogue and Kid Cudi’s cutting edge sci-fi calculations.

The first Bill and Ted film was Reeves’ breakthrough role. This pre-dates his action hero role as a surfing FBI agent in the 1991 Point Break and the LAPD SWAT bomb defusal unit officer in the 1994 Speed. It’s easy to see the surfer dude persona in Reeves’ Ted, but not the sharp, analytical law enforcement officer or Reeves’ more recent reserved but intensely angry John Wick. Reeves’ Ted is a delightfully dim dude who has a moral center but also a strong co-dependency problem with Winter’s Bill. You can believe that Weaving and Lundy-Paine could be the offspring of Bill and Ted and their Thea and Billie could possibly be part of the Bill and Ted family.

The oddest thing about viewing the three films back-to-back, is that Reeves’ hair gets progressively worse. Being a middle-age garage band dude is obviously not about fashion, particularly if you’re playing in Barstow. His Ted has gone from that puppyish youthful enthusiastic teen to a slightly more thoughtful and downtrodden guy. After all, 25 years is a long time to be a bad musician.

You might want to go back if you have a question about the phone booth or certain telephone keys. Despite the interchangeability and lack of continuity for the roles of Bill and Ted’s 15th century sweethearts, this is a bromance that isn’t ickily off-putting for women. Reeves and Winter’s San Dimas dudes are sweethearts. The cast seems to be having fun. Hopefully, you will, too.

During these divisive times, Bill and Ted and the charming besties of Billie and Thea are a reminder that we should all be excellent to each other and that “infinite pasts entangled with infinite futures.” With Death, there’s also a message of reconciliation. The end credits include videos of fans celebrating the return of Bill and Ted. Wait for the post-credit scene.

Maybe there isn’t a song that will unite the world, but it’s also too bad that in 2020, we all aren’t trying to find it. Remember, “you are right where you belong.”

Bill & Ted Face the Music is streaming on Premium VOD, including  FandangoNow, Apple TV, the iTunes Store, and Google Play.