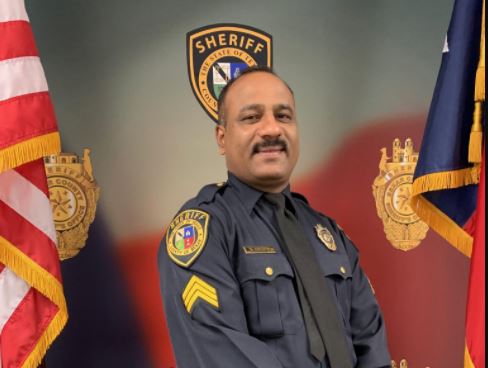 Sometimes there are folks out there who seem to have so much on their plate but they somehow manage it because they are just so dedicated to making a difference. For them the sleepless nights are beyond worth it. Sgt. Abrahama Abraham,48, is one of those people.

The eight year veteran with the Bexar County Sheriff’s Office in San Antonio, Texas is one of those difference makers and despite having an extraordinary amount of responsibilities, he comes across his responsibilities with strong, albeit modest, conviction.

Born and raised in Kerla, which is located in the Southern part of India, Sgt. Abraham describes his upbringing as very studious. At 23, he became a Lawyer in New Delhi after moving to attend law school at Bangalore University

He first moved to the Rio Grande Valley near McAllen, Texas in 2005 with his wife, where he pursued a Master’s in Public Administration. After they had their first child a few years later, Abraham and his family settled in San Antonio and later enrolled in law school at St. Mary’s University.

Despite already having a Law degree from India, which was accepted in the United States, there was a stipulation with credits that required him to pursue additional studies and earned a Master of Laws degree.

When Abraham completed his citizenship in the United States, he decided to take on another task to help make more of a difference.

“In 2010, I became a citizen of this country,” Abraham said. “I wholeheartedly wanted to embrace everything to become a United States Citizen and when I did, I wanted to really get involved in every aspect of the community.”

And Abraham felt the best way to make that difference, was by joining the Bexar County Sheriff’s Office, where he rapidly rose through the ranks due to his hard work and commitment.

After getting promoted to the rank of Sergeant, Abraham worked as an Internal Affairs Investigator for three years, where he reviewed fellow officers that violated orders or looked into citizen complaints against deputies.

“Working in internal affairs, there are pluses and minuses in it,” he explained. “You put yourself in an uncomfortable situation because officers are getting into trouble and its unfortunate one of their own has to investigate.”

Still, Abraham noted, it was his responsibility to make sure there were no shortcomings during his investigation, which was nothing he could not handle.

“I did scrutinize every aspect of every violation and I did investigate to my fullest capacity,” he said. “So every day was a good day because I could go home and sleep [soundly] because I knew everything I did was professional in that particular field of law enforcement.”

In fact, his legal knowledge was more than enough for Abraham to understand the gravity of how serious the consequences could be if he were to not address certain violations.

“As far as officers, we did not put them in that position, they chose to,” Abraham mentioned. “And as a legally educated person, I know if we do not take the step at this time, then the legal liability that these people can bring five years down the line can be enormous if it’s not nipped in the bud.”

His responsibilities continue to grow as the current Open Records Specialist, where he helps citizens as well as media officials receive public information.

“People request information that is vital and they have every right to know. It is my responsibility to get the information, see what thy’re asking and give what is due to them,” He explained.

On top of that, Abraham serves as both the Legal and Indian Community Liaison for Bexar County. Meanwhile, as an Indian Liaison, Abraham’s responsibility is to essentially be the mediator between people of Indian descent, with respect to the Sheriff’s Office, a position he’s served in for two and a half years.

“My responsibility is to reach out to the community and to work as a bridging gap between the law enforcement and the Indian community,” Abraham said.

As a person of South Asian descent myself, Abraham and I briefly discussed how issues involving mental health or domestic violence, typically are not addressed within the community as they’re seen as “private” issues. In November 2019, I reported on a man who showed up at his ex-girlfriend’s church, put a knife to her stomach and threatened her. Witnesses on the scene refused to speak to police and were even heard telling the victim she should not have called police.

RELATED: Man accused of threatening, holding knife up to ex-girlfriend at church

However, as a member of the community and a law enforcement officer, Abraham explained he hopes to help correct that so people can get the help they deserve and that he is there for them.

“I am very much aware of [those type of issues] and if I come across that, I do step up and advise them to do the right thing.” Abraham said. “Even when I came to the united states, we had to take a lot of classes on mental health people saying ‘I hear or see’ things it was hard for me to understand because I never knew about these things back in India.”

Abraham added that when it comes to mental health issues in general, there is a stark difference for them being reported in the Indian community.

“In general, some mental health issues, are under reported,” Abraham said. “But the tendencies of Indian communities they ultimately get unreported.”

At the moment, Abraham is also studying for the Bar exam. And with all the previously mentioned work on his plate, one must be curious, does he ever sleep. And admittedly, it has not been easy to do so.

“Technically for the past few months,” Abraham said. “I spend all my extra hours on my books and preparations but that’s what’s expected of a law graduate cause the Bar is a subject you really have to own.”

However, Abraham says he thankfully has a fair amount of responsibilities that enable to him to devote enough time to each task. “I’m not bombarded with responsibilities at once,” he explained. “There’s a place for everything and time because if I have to work on a legal contract, I can take my time. I can devote myself to it.”

In the end, Abraham gives off the essence of one who genuinely enjoys and takes seriously. And given stressful times for communities of color and law enforcement officers, one can only hope there will be more officers that aspire to be like him.

“I enjoy what I do and I try to do the best of what I can as far as the Indian community and fellow officers are concerned but in today’s time, Law Enforcement is not regarded as it should and I hope things change,” Abraham concluded.