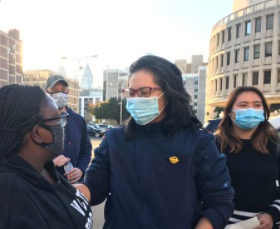 She was released without bail the next day, following continued protests outside the police department from members of VietLead, a Vietnamese American advocacy group, and other community organizations. Nguyen is a co-founder and executive director of VietLead.

The arrest is believed to be attributed to a demonstration on September 8, during which Nguyen protested outside ICE acting director Tony Pham’s home in Virginia.

“Her arrest is politically motivated. It was a message that said, ‘This is what we’re willing to do if you dare to fight back,’ But we have no choice but to fight back,” said VietLead in a statement.

Philadelphia City Councilmembers Helen Gym and Kendra Brooks were also among supporters present at the police department upon Nguyen’s release.

“Nancy is a sister,” Gym said. “She’s a leader in our city across the board, she’s been fighting for justice all her life.”

In an op-ed published by The Philadelphia Inquirer, Nguyen writes that she was taken by surprise when police entered her home and arrested her in front of her children.

“I want Philadelphians to understand that I never saw the warrant for my arrest, apparently from Virginia, and was never told clearly why I was being detained and separated from my family,” she said.

Nguyen has condemned the Philadelphia Police Department and Police Commissioner for taking part in what she believes is a “retaliatory arrest” in response to her protests against Pham. She also accused police of holding her in a basement with other detainees without proper PPE to protect themselves from the COVID-19 pandemic.

Philadelphia officials called the circumstances of Nguyen’s arrest “extremely unfortunate” and praised Nguyen as a leader in immigration activism. However, they also continued to defend the actions of local police officers.

Nguyen says the arrest was ultimately “an attempt to criminalize nonviolent peaceful protest.”

“I believe this arrest was an attempt to silence and intimidate me, and my community, people of the Viet diaspora, Asian Americans, and immigrants broadly, from doing what we need to do as active citizens: speak truth to power.”