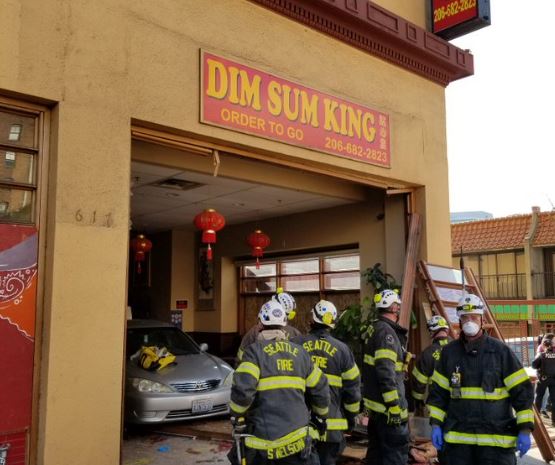 Seven people were injured after a car crashed into a Chinese restaurant in Seattle Thursday afternoon, reports Seattle Times.

A driver in a Toyota Camry accelerated backwards into Dim Sum King, located in the Chinatown-International District. Police say the driver appeared to be attempting to park the car on South Jackson Street when the car went over the sidewalk and backed into the front of the building.

According to King5, the car pushed a man and a woman further into the restaurant, where firefighters had to help them get out of the building. The Seattle Fire Department transported four people to Harborview Medical Center, while the others were able to take themselves to the hospital. The driver and a passenger in the car were also taken to the hospital for evaluation.

At least two people were hospitalized with potentially life-threatening injuries.

“We’re very fortunate that it wasn’t more severe than it currently is,” said David Cuerpo, public information officer for the Seattle Fire Department. “We’re glad that we were able to get the people who were trapped quickly out, and get evaluated and also transported to a hospital.”

Fire crews at the scene determined that the crash did not cause any severe structural damage to the building.

The crash is currently believed to be an accident.