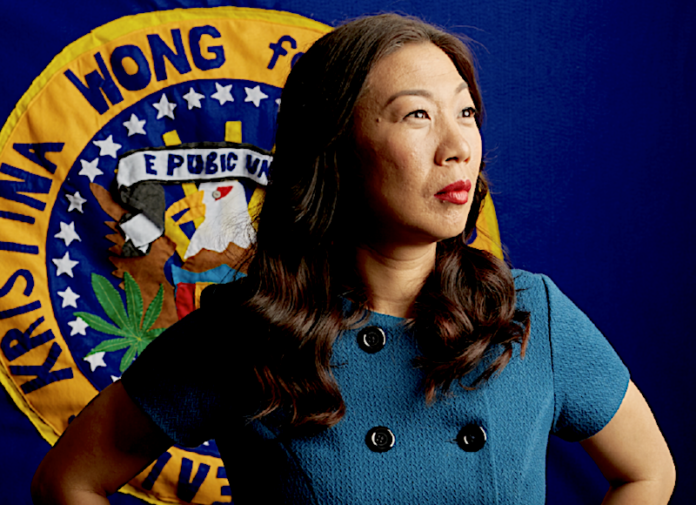 If you think of elected officials as people who smile too much and speak with little sincerity, Kristina Wong is here to show you that you’re wrong. Maybe.

Inspired by her real-life foray into public office, Wong challenges our perception of politics in her latest production, Kristina Wong for Public Office. The 75-minute one-woman show was filmed live at the Kirk Douglas Theatre in Culver City, Calif. and is available for streaming through tonight.

A comedian and actress, Wong is also known for the satirical video series Radical Cram School, as well as Wong Flew Over the the Cuckoo’s Nest, her comedic one-woman show about Asian American women and mental health.

In Kristina Wong for Public Office, performance art mixes with her new political reality. Wong successfully ran and won a real public office in Los Angeles’ Koreatown. Sauntering onto stage in a white pantsuit that you might associate with former presidential candidate Hillary Clinton, she shares her experience as an elected official.

Wong gives us a view of a council meeting that a more seasoned or ambitious politician might want to hide. She complains about the burden but understands the necessity of procedure and listening to others. Kristina Wong for Public Office demonstrates that representing the people and making change aren’t that easy.

Watching the promotional video, it’s clear the original scripted experience would have been more intimate and interactive. Director Diana Wyenn uses some video and narration to gloss over the obstacles brought on by Covid-19. At the same time, this video performance is an opportunity both for those who miss the theater scene and those who would not normally make the trek. Sit back in your comfy clothes and be entertained while contemplating politics. What could be Wong with that?

Catch Wong’s one-woman show by Nov. 29. Tickets for the exclusive on-demand video performance are $10 and on sale via Center Theatre Group.

Kristina Wong for Public Office was filmed live at the Kirk Douglas Theatre in Culver City and presented by the Center Theatre Group in partnership with The Broad Stage.