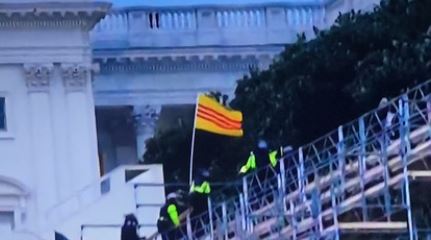 Asian Americans in both Washington, DC and Silicon Valley joined those protesting the results of the election Wednesday.

GMA Network reported a number of Filipinos flew in from across the United States to join the protest.

“We have heard that there are other Trump supporters and we have seen them from other states here in America, but we are not sure how many of them there are,” said Jose Manuel Romualdez, the Philippine ambassador to the U.S.

Philippine President Rodrigo Duterte openly supported Trump and urged Filipinos to vote for him, according to the Asian Journal.

The Embassy in Washington said it would look into whether any of those Filipino protesters suffered any injuries after a mob stormed the Capitol building, even making it into the Senate chambers and congressional offices. Four people died in the violence.

The only important thing now is to make sure that no Filipino gets involved in that mess,” said the Embassy.

The Progressive Vietnamese American Organization posted photos of the Vietnamese flag being flown outside the Capitol during the protest.

“We have been so disgusted to see the Vietnamese flag flown at pro-Trump rallies, but to see it at the coup today, surrounded by White supremacist terrorists, is beyond words. How did we get here and how do we reclaim our flag?,” the group asked on Facebook.

Many carried the Vietnamese flag and wore military uniforms. Support in the Vietnamese community for President Trump comes from the older voters and community members who carry deep resentment of the communist takeover of their home country.

“America will never be a socialist country,” one sign read.

In Los Gatos, an Asian supporter suffered minor injuries after someone fired possibly an air gun towards the crowd and then grabbed a woman holding a flag.

South Asia American supporters of Donald Trump could also be found on social media. It’s not know if they were part of the group that stormed the Capitol building.