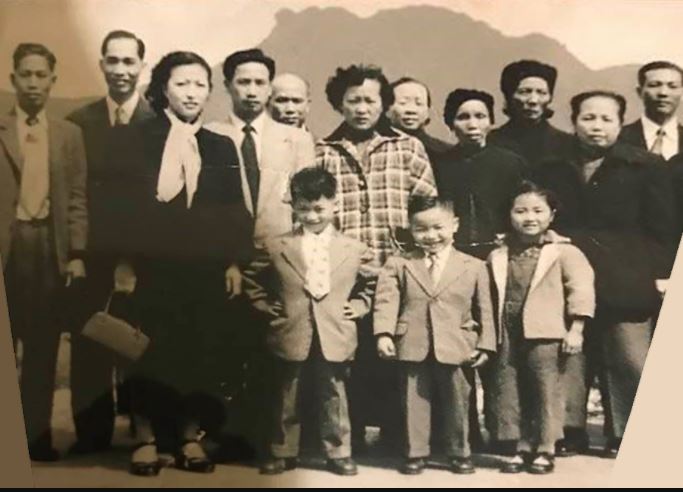 The US Appraisers Building in San Francisco serves as an ominous remembrance of Chinese immigration to America.

The 1943 Magnuson Act officially marked the end of the 1882 Chinese Exclusion Act. Yet immigration officials discriminated and tormented Chinese immigrants for at least another decade. The Angel Island Immigration Station continued to exclude Chinese immigrants to America.

In 1940, after a mysterious fire destroyed the Administration Building at the Angel Island Immigration Station, the government moved the detention center inland to an old two-story training college, at 801 Silver Avenue, in San Francisco. In spring 1942, the United States Immigration and Naturalization Service moved it to the Sharp Park Detention Station.

Congress repealed the 1882 Chinese Exclusion Act, that had restricted Chinese immigration in 1943. The Magnuson Act finally allowed naturalization for Chinese but only assigned annual immigration quota for 105. INS still detained Chinese to determine their eligibility for admission into America, while practicing their racial discrimination.  They treated Chinese with contempt and suspicion.

Fred Jang is the son of late Jing Lan Jang, his mother, and late Way Ding Jang, his father. His mother was detained and interrogated at the San Francisco Immigration Station.

In 1989, Jang started working for the Government Services Administration as an architect. In an ironic twist, he managed the interior modernization of the US Appraisers Building.

“The Appraisers Building was built to support two government operations: the storage and appraisal for customs evaluation and temporary housing for new immigrant arrivals waiting entry processing, Jang explained to AsAmNews. “After the Angel Island Immigration Station closed, this facility served as a primary gateway for Asian entrants to the United States. It is hard to imagine as you look around the Appraisers Building today that the upper floors once contained dormitories, day rooms, and kitchens to support the individual needs of different ethnic groups.“

Jang had an opportunity to inspect the building after the 1989 Loma Prieta Earthquake. Then he had a chance to learn more about the building’s immigration history which resurrected memories told to him by his mom and other relatives.

Leong and Eng faced a rigorous interrogation process to validate their admission eligibility. She was separated from her son. She was not able to communicate with her husband.

Finally, on September 20, 1948, after delays, federal immigration officials interrogated her. They systemically probed Leong about her family background, her marital relationship, and her political views, in search for any discrepancy. They did not confirm her immigration, so Leong faced deportation. The next night after her interrogation, on September 21, 1948, Leong hung herself in a shower stall  at her quarters.

Jing Lan Jang was a 34-year-old war bribe of Way Ding Jang. She arrived at San Francisco in 1950.

RAYMOND DOUGLAS CHONG What was background of Jing Lan Jang, before she met your father?

FRED JANG I recall my Mom telling us that she grew up in an upper middle-class family with several servants. According to my Mom, they had an arranged marriage and lived in Nam Hoy, Kow Kong which is in Guangdong province.

RAYMOND DOUGLAS CHONG  What did Way Ding Jang do in San Francisco before he served in United States Army?

FRED JANG  My Dad came over to the United States in the 1930s working for my Grandfather’s family business located in San Francisco Chinatown.  He immigrated via Angel Island Immigration Station. My Dad worked as a bookkeeper at Kong Yick Company before he joined the Army and after World War II.

FRED JANG  I have little highlights from my Dad’s World War II experience, only stories told by my mother.  My Dad was stationed in Italy.  He was a US Army Technician Fourth Grade, in the Ordnance Division. My Mom told me that he served as a driver for a high-ranking officer.

RAYMOND DOUGLAS CHONG Describe the circumstances of courtship between your mother and father.

FRED JANG  I believe it was an arranged marriage. According to my Mom, she was about 16 years old when she married by Dad. I had an older sister that I never knew.  She passed away during World War II.

RAYMOND DOUGLAS CHONG  Describe her journey on Pan Am Clipper Boeing 377, as a war bride, from Hong Kong to San Francisco.

FRED JANG Coming from an upper middle-class family, my Mom decided to travel via the Pam Am China Clipper instead of spending 30 days at sea crossing the Pacific Ocean. It took over 40 hours of travel time from Hong Kong to San Francisco.  There were several fueling stops in the South Pacific Islands, including Hawaii before landing on Treasure Island.  That was San Francisco International Airport before it moved to the current location in South San Francisco.

FRED JANG Once she arrived Treasure Island, she and the other passengers were transported to the INS facility located in 630 Sansome Street.

My Mom did not speak or understand English. I assume there were Chinese translators asking detail questions about her life in China and also about her marriage to my Dad.

I remember my Mom telling us that she brought over a hand full of soil from China to reduce her homesickness.  This was confiscated by the customs officer when she arrived at San Francisco International Airport.

RAYMOND DOUGLAS CHONG Describe their lives as husband and wife after the detention.

FRED JANG  Coming to America via the War Brides Act was a new start for the family.  Losing a child during World War II was difficult for my Mom and Dad. My Dad was living in the United States longer than he was back home in China.

The reason that my Mom came to the United States was to start a new life and to join her husband.  Starting a new family and erasing the memories from World War II and the Japanese occupation of China.

After my Mom was released from detention, Mom and Dad lived in an apartment located at 660 Jackson Street, just three blocks from the Appraisers Building.

Ken Moy, with Sam Moy, his brother, lived at Toishan in Kwangtung. After the fall of China to the Communists, fearful people escaped by sampans to Hong Kong.

At age of 6 years old, Moy and his brother, with their aunt, arrived on April 2, 1952, via Philippines Airlines, in San Francisco International Airport,. They were detained at the women quarters of San Francisco Immigration Station.

After about six months, they were released to Gene Wing Moy, his father, a former US Army Corporal, to live in Milwaukee.

RAYMOND DOUGLAS CHONG Tell me about life in your village.

KEN MOY I was born in 1945 at Toishan. Our family was of wealthy class.

Landlords were tortured inside pig basket by water in the town square. It was tough to watch. I saw bodies in the fields. My uncle, a merchant, disappeared without a trace.

RAYMOND DOUGLAS CHONG Tell me your journey from your village to Hong Kong.

KEN MOY Villagers sent us and my aunt (paper son mother) off on a bus to catch a sampan down river to Hong Kong. It was a long journey. We travelled at night. Pirates raided our sampan several times. With guns, they searched for jewelry, gold, and other valuables. I hid a diamond necklace in my socks. Several persons were taken away. We were the original “boat people.”

RAYMOND DOUGLAS CHONG Tell me about your time at Hong Kong.

KEN MOY  We landed at Port of Hong Kong at night. Our relatives dressed us up with suits and gave us haircuts. We stayed at home of her relatives. We attended school before we departed. I saw White people, Britons, for the first time.

RAYMOND DOUGLAS CHONG Tell me about your detention at San Francisco Immigration Station.

KEN MOY We were shipped from San Francisco International Airport terminal to detention center. We had memorized  cheat sheets.  You were interrogated by officials with simple questions. We were told not to share anti-American feelings. We had been brainwashed at school by the Communists to fear Americans. I was really scared of the Whites.

We stayed at women quarters with Sam and my aunt. The American dishes in the cafeteria were terrible. I remembered the Chinese poems craved in the lath and plaster walls. Meanwhile, I had nightmares about the village atrocities against the landlords. It was a scary time for me.

After about six months, we were released from the detention center. On day of our release, I was confused. But I realized that we were free. I found my first American quarter on the streets of San Francisco. I initially thought I had found gold nugget on Gum Saan – Gold Mountain.

KEN MOY My grandpa owned a laundry at Milwaukee. My parents were in restaurant business in a suburb of Milwaukee. I graduated from Milwaukee Area Technical College with Associate Degree in business. I owned “Moy’s China Dragon,”  a Chop Suey restaurant in an art deco building at Thiensville, a suburb near Milwaukee, from 1973 to 2016. My business was named in honor of Bruce Lee, martial artist.

For a decade, 1944 to 1954, INS detained Chinese immigrants at San Francisco Immigration Station. Federal immigration officials shabbily treated them, including war bribes, with contempt and suspicion, to exclude them to enter America. The United State Appraisers Building on 630 Sansome Street in San Francisco is a dark legacy of Chinese exclusion in America.