HomeKorean American"To All The Boys" Jenny Han Reflects On Turning Books Into... 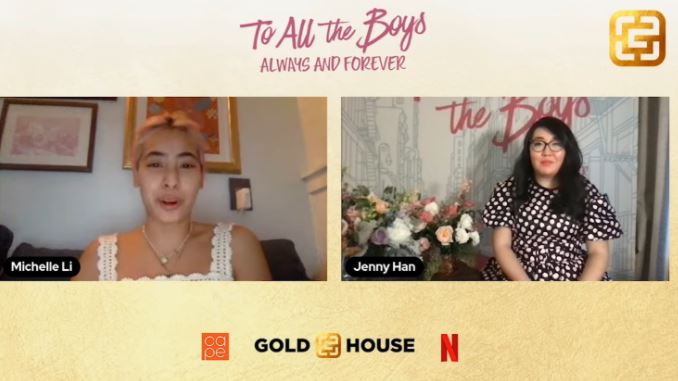 Jenny Han revealed recently that it was her own love letters that inspired her to write the To All The Boys book series.

She never sent those letters, but out of them, came her best selling books.

“The idea came about from my own life growing up. I found all the love letters. I thought about what would have happened if I did send them to these boys at the time. And that’s how the story came about”.

Neflix adapted her series of books into three Netflix films. The first one To All The Boys I’ve Loved Before (2018), second one To All The Boys: P.S. I Still Love You (2020) and the third and final instalment To All The Boys: Always and Forever (2021). All three films star Lana Condor, who plays protagonist Lara Jean as she grapples with her love life throughout high school. The first film revolves around her love letters being exposed, the second film is all about her relationship with Peter (Noah Centineo) and turning from “pretend” to “official” as more boys come into the picture, and the third and final film puts the relationship to the test as Lara Jean considers what her future college life would be like with and without Peter.

In a half hour Facebook Live on GoldHouse Facebook page this past weekend, Michelle Li (Editor, Teen Vogue) had a conversation with Han on her thoughts and reflections after having her story made into three Netflix films, with the first one To All The Boys I’ve Loved Before being released at the start of the movement for cultural change in Hollywood/American films and TV.

“If you think about it, the first film was released just a few years ago in 2018. But talks happened before then and at a time when having an Asian character as the main character was still not seen as normal.”

“Even though there was interest in the story from Hollywood, people were confused by the fact that the main character was Asian. For me, it was a red line not to cross and if the Lara Jean’s character would change to be a non- Asian that was a deal breaker.”

A simple idea of bringing unsent love letters to life has become a film franchise and one which many women such as myself can relate to thinking back to our high school crushes, dates and puppy loves. But more importantly, it shows that representation is more than just telling “Asian stories with Asian actors”, but it can also be just regular teenage life stories about love, heart break and regrets. A new generation of Asian/Asian American women will have seen themselves reflected on the TV screens without perpetuating any negative stereotypes. Han reflected a lot on this and said that even back then when negotiating and selling the rights to her book, “getting it right by the community” was a must.

“I wanted to do right by the community by not changing the race of Lara Jean. I am glad that I stuck to my guns. As a creator of color there are many more levels and intricacies we have to think of when making film/TV deals.”

And finally, what legacy would Han like to leave the world. She tells Li that she hopes it will open up the door to more films featuring Asians and characters of color and she hopes she has left the final film in a “optimistic and hopeful place”.

“Lara Jean and Peter are still young, so who knows what the future has for them. But one thing is for sure and that is if anything, I hope the legacy I have left with All The Boys is that more movies can be made with culturally diverse characters and from voices not heard a lot from. That would be most meaningful”.

You can catch all three of “To All The Boys” films on Netflix, so if you are in the mood to binge, go check them out.