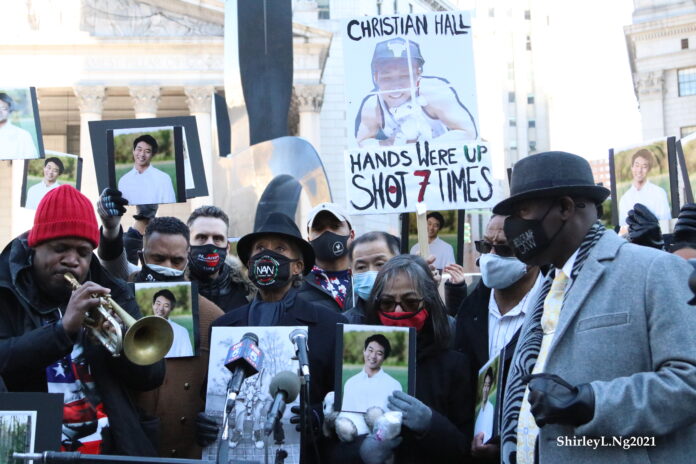 The #JusticeForChristianHall rally and news conference Sunday drew a modest crowd in Lower Manhattan calling for justice in the death of 19-year- old Christian Hall.

Christian Hall was a Chinese American man having with a mental health crisis following a break-up. Pennsylvania State Police officers shot him several times on December 30 while he was suicidal and distraught on a bridge.

“His hands were up in the air. He was shot seven times.” Christian’s mother, Fe Hall said as she wept. She said the cops were supposed to help the situation, “but, instead the cops shot him.”

Fe and her husband Gareth have retained Ben Crump as their attorney to file a federal civil rights lawsuit. He is also asking Pennsylvania State Attorney General Ben Shapiro to investigate. He said a video has surfaced on social media showing Christian alone on the bridge with his hands up when the cops shot him seven times. Crump has also represented the families of George Floyd, Michael Brown, Trayvon Martin, and Tamir Rice.

RELATED: Al Sharpton calls for justice in the death of Christian Hall by police

Manhattan Borough President Gale Brewer, NY State Senator John Liu and Reverend Al Sharpton were at the press conference. They spoke up against police misconduct against minorities and asked for solidarity from all people of color and for each other. They support the call for an investigation.

The press conference also called for more mental health resources so that mental health care workers can assist with such crises rather than cops.

Gwen Carr, the mother of Eric Garner was also present and was seen linking arms with Mrs. Hall to show solidarity for their sons and between the Asian and Black communities. Carr spoke against the shooting of Christian and called for police accountability. Her son was killed by an officer using a prohibited chokehold while being arrested in 2014. The NYPD Officer, Daniel Pantaleo, was fired with no criminal charges filed.

At the closing of the press conference Keyon Harold Sr. played, “Amazing Grace” on his trumpet for Hall’s parents. Harold Sr. is the father of the 14 year-old-boy who was the victim of “Soho Karen,” known as Miya Ponsetto. Ponsetto allegedly physically attacked his son, Harold Jr. in a Manhattan hotel during Christmas week when she accused him of stealing her iPhone. However, her iPhone was apparently left it in an Uber car and the driver returned it later. She is charged with attempted robbery, attempted assault, endangering. the welfare of a child and grand larceny.

Christian was adopted from China as a baby. His father, Gareth, is of Black and Latino heritage spoke about how his son who was proud to call himself “Blasian” even-though he was Chinese and not biracial. The mother is Filipino.