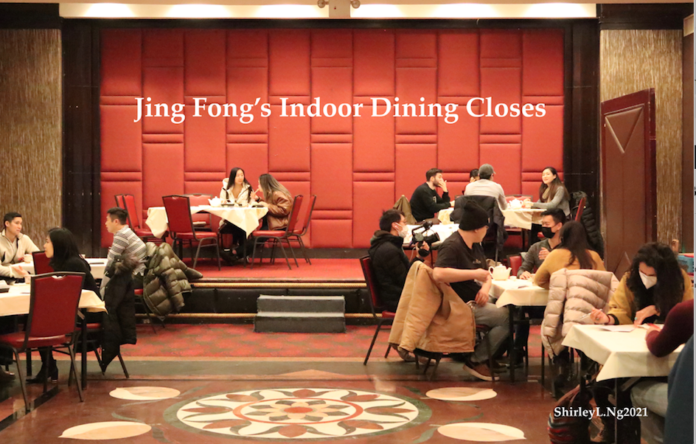 In February, Jing Fong announced on Facebook that they would be closing their indoor dining, but will remain operational for take-out orders and their outdoor dining.

The restaurant has been operating since 1978 and was only one of two such restaurants with unionized workers. Silver Palace Restaurant was the other one, but it has been closed for several years. The 50 Bowery Hotel came in to replace it. The hotel is owned by The Chu Family, who are also Jing Fong’s landlord.

Several people waited in line for indoor dining in the early afternoon. Patrons filled their recently opened outdoor seating to capacity.  Staff took a constant flow of take-out orders at the front entrance.

Once inside, a healthy pair of legs would require you to ascend on the steep escalator that has been turned off for an unknown amount of time and reasons. They do have an elevator if you need to use it. A table and cashier has been placed inside against the front glass panels as a makeshift take out order counter for pick-ups.

Justin from Long Island was dining on the last day with a friend. “It’s definitely a loss. I’ve been coming here since I was kid. It’s too bad, but at least we’re here eating one last time.”  He likes the shrimp rice roll, turnip cakes, and the “loa sah boas”, with the “lava salty egg yolk bun.”

Jing Fong, like many other small businesses, suffered economically from two tragic blows, the pandemic and xenophobia towards Asians. Small businesses in the Chinatown zip code of 10013 suffered when somehow they were omitted from eligibility for Paycheck Protection Program loans.

In a January community board meeting, advocates, residents and small business owners protested the omission and demanded to know how and why that happened.

According to the city, 10013 includes the wealthy areas of Tribeca and Soho, where many high net worth residents live in luxury high-rises, lofts or remodeled turned of the century tenement walk-ups, thus making businesses in this zip code ineligible, which included parts of Chinatown.

In the Gothamist, Jan Lee, of the Chinatown Core Block Association, noted the loan program was framed as beneficial to communities of color in the agency’s initial announcement.

“The loan is designed for minority communities and minority businesses. I don’t understand how you can leave out Chinatown because you’re using us in your publicity for your office,” Lee said. “Using our faces, using our businesses, using us a backdrop for your supposed advocacy for minorities.”

This criteria for the PPP loans in the zip codes were based on income of residents and not small business profitability. The wealth of the residents in 10013 negated the eligibility of small businesses in the area.

The committee board members sought to fix the issues and base eligibility for PPP loans on Census Track Data, as suggested by Yin Kong, Director of Think!Chinatown. Kong feared back in January that it may be too late to amend the eligibility for the loans. Money had already begun to be distributed and the remaining funds may not be enough to support Chinatown.

At 1:30pm, Jing Fong’s indoor dining with its spaced out tables appeared to be doing well, but not well enough to remain open. Half the restaurant towards the main stage was closed.  Light staff was visibly hustling dishes to their patrons or taking orders. There were no waiters with matching jackets to be seen. The chaos and traffic of dim sum carts of the once fully packed restaurant was absent. A majority of the patrons were middle-aged. The usual large amount of seniors and families in the restaurant were absent as they have likely been through the pandemic.

Last week, a rally in Chinatown was organized by 318 Restaurant Workers Union and Youth Against Displacement to press Jing Fong’s owner and landlord, The Chu Family, to work together to keep the union staff employed there.

“The owners of Jing Fong decided that this type of extremely large space is no longer sustainable for their restaurant,” said Jonathan Chu of Chu Enterprises in amNY. “Nobody has tried harder to keep Jing Fong in this space than we have. Jing Fong’s base rent has remained the same since 1993 – and the restaurant hasn’t paid any rent for the last 12 months. My family has been loyal patrons of Jing Fong for decades, standing shoulder to shoulder with employees on holidays and during important life events. We are saddened by this pandemic and the unemployment that has resulted from inadequate federal, state and local support for workers and small businesses.”

The family’s rep. Eric F. Phillips of the PR firm Edelman, said “Nobody wanted Jing Fong to succeed more than the Chus. “The sad reality is, while the pandemic has made this even more obvious, this extremely large space was not sustainable for Jing Fong’s business. The restaurant’s owners know that.”

According to Claudia Leo, Jing Fong’s director of marketing and PR, countered those statements. “Long story short, they wanted the space back,” she told Grubstreet, but she also said “We’re not too sure whether or not they wanted to renew the lease.”

Zishun Ning, of the Coalition to Protect Chinatown and the Lower East Side, set up a table next to Jing Fong. She and a woman named Joanne tried to gain support to keep the restaurant open.

“Jing Fong didn’t say that they were not renewing their lease. It does not appear The Chu Family asked them to leave, right?” I asked Ning.

“Well, that’s what they want you to believe,’ he said to me.

A restaurant host stood at the top of the escalator. He didn’t want to provide me his name, but told me he has been there since 1993 and is sad.

Jing Fong’s restaurant in the Upper West Side will remain open.