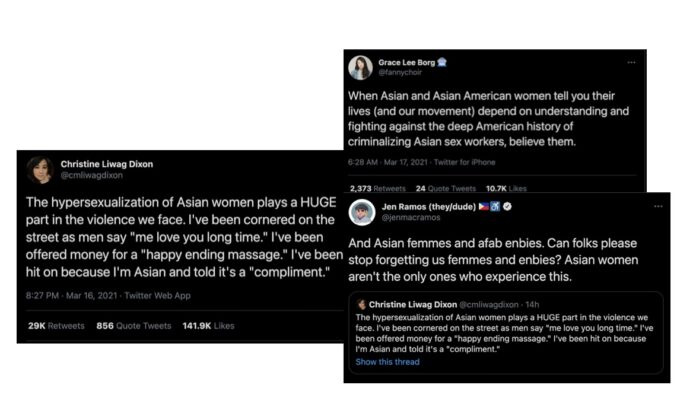 Asian women are speaking out about their experiences with hyper-sexualization after shootings at three Atlanta spas killed 6 Asian women on Tuesday night.

Many Asian women feel that the hyper-sexualization of Asian women throughout history plays a massive role in the violence Asian women face. Christine Liwag Dixon shared her experiences on Twitter.

Robert Aaron Long, the 21-year-old suspect who has confessed to the shootings told police that his actions weren’t racially motivated. Instead, he claims that he suffers from sex addiction and was trying to eliminate temptation by targeting Asian spas he often frequents, NPR reports.

But many Asian women on social media pointed out that Long’s “sexual addition” and fantasies likely intersected with stereotypes of Asian women.

Asian activists also pointed out that cis Asian women are not the only people who suffer from those stereotypes. Jen Ramos note that non-binary Asians also experience hyper sexualization.