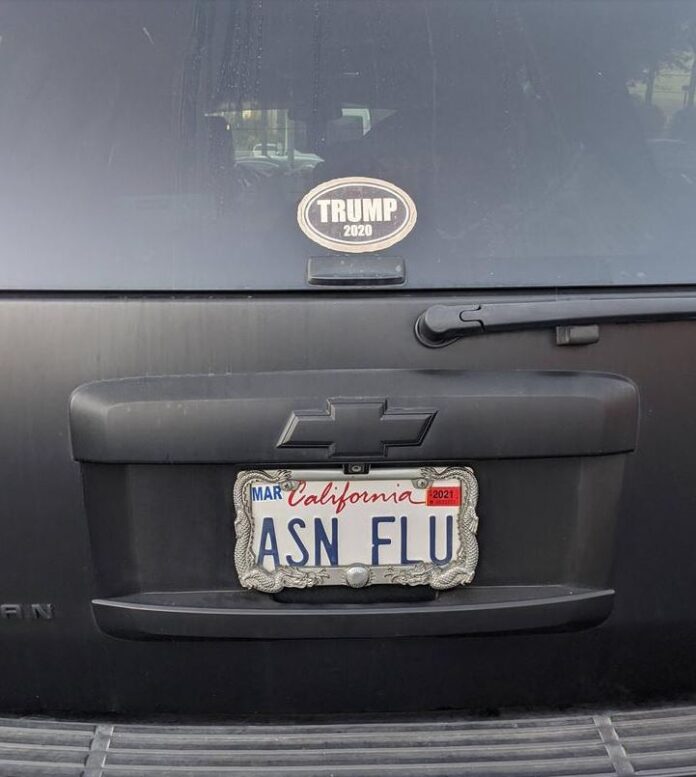 A photo of the California license plate belonging to a Trump supporter with the words ‘ASN FLU’ displayed on it sparked anger among many Asian Americans this week.

Democrats blame former President Trumps use of terms like the kung flu, Wuhan virus and Chinese or China virus for the spike of anti-Asian hate in the United States.

The owner of the vehicle placed a Trump sticker in the rear window of the SUV right above the plate.

The California DMV confirmed to AsAmNews that it did issue the vanity license to a California driver.

“WTF? What kind of person “bleeping” does this?” wrote one commenter on Facebook.

“Abuse of freedom of speech,” wrote another.

“I’m even more mad that they let them have it on there plate,” said a third person.

“The DMV currently does not have the authority to cancel this type of plate due to the court ruling in the Ogilvie case,” a DMV spokesperson said via email.

A U.S. District Court in November ruled that the DMV could not enforce its ban on what it considers “offensive to good taste and decency” due to the first amendment.

However, Judge Jon Tigar also ruled the DMV could deny plates that are obscene, offensive, or contain hate speech that falls outside the first amendment.

“The DMV is currently evaluating its options as they relate to the ruling,” the spokesperson told AsAmNews. “There may be more information to provide soon,” it later elaborated.

Some on Facebook brought up the Slants ruling, the 2017 Supreme Court case that affirmed the Asian American rock’s group right to trademark its name despite the patent office fears some might find the term offensive.

The Slants argued their name reclaims what is seen as a slur.