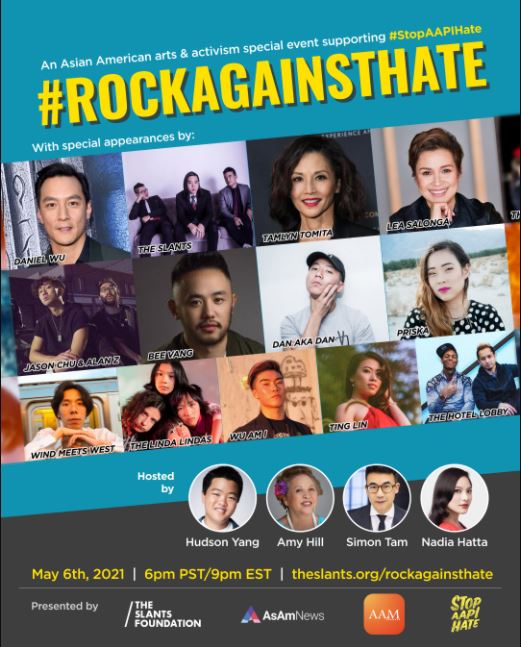 Rock Against Hate, the free virtual concert on May 6 to benefit Stop AAPI Hate , announced today several new exciting additions to the line-up for the arts and activism festival.

“With what was going on recently, with the Asian American attacks, it was something I couldn’t ignore anymore,” Lee recently said about Tonight in an interview with AsAmNews.  “I wanted to visually represent Asians just to try to bring more awareness to the movement and just kind of do my part, use our platform to try to do anything to make a difference.”

Also new to the line up are The Linda Lindas, a band who was recently featured in Amy Poehler’s new film, Moxie. The young girls say they will perform a song specially composed for the evening.

“It’s a short song, but it was chosen just for this cause and event and will make a big impact. Can’t wait for you to see it,” said a band spokesperson.

The Linda Lindas and The Hotel Lobby will join the other music headliners of the evening, The Slants, Dan Aka Dan, and Priska.  Wind Meets West, Ting Lin and Wu Am I will open the festival.

Jason Chu and Alan Z, notable Asian American rappers and activists who are collaborating on an upcoming project, will also appear along with several additional celebrities.

The event is free, but the audience will be encouraged to make donations to Stop AAPI Hate and to support other Asian American non-profits.

Concert goers are encouraged to RSVP.

Rock Against Hate is produced by AsAmNews, The Slants Foundation and Asian American Movies.