5 AAPI Trailblazers You Should Know 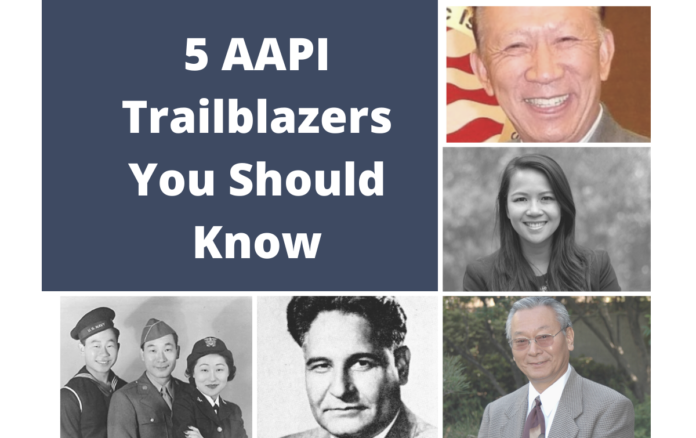 During Asian American and Pacific Islander Heritage Month, AsAmNews proudly pays tribute to these five trailblazers. They have enriched American history by their lofty endeavors. They have blazed the trail for future generations to succeed in our America.

CC Yin, a Chinese American, was born in Chengdu, Sichuan, China, in 1937. He and his family fled to Taiwan after Communists took over China from the Nationalists in 1949. He arrived at America in 1964. With $100 in his pocket and little English, Yin followed a career as a civil engineer. In 1984, he brought a failing McDonald’s restaurant in Oakland and successfully made a profit. Now Yin operates a fast-food empire with 30 McDonald’s restaurants in Northern California. He and his wife, Regina Yin, along with others, founded the nonprofit Asian Pacific Islander American Public Affairs in 2001. They were deeply concerned about the lack of Asian American and Pacific Islander representation in local, state, and federal politics. With 30 chapters, the nonprofit strives to empower the AAPI community.

Yosh “Bill” Watanabe, a Japanese American, was born in Manzanar, California, a desolate concentration camp, in 1944. His family had been among the more than 120,000 Japanese Americans incarcerated during World War II. After a brief career as a mechanical engineer in the aerospace industry, he pursued a career in social welfare. In 1980, he became the founding executive director of the Little Tokyo Service Center. He was charged to develop a multi-purpose social service agency. During his 32 years with LTSC, he contributed to the vitality of Little Tokyo and Downtown Los Angeles. He built and renovated hundreds of affordable housing units for seniors and families, revived an abandoned historic church into a visual arts center for East West Players and renovated the landmark Far East Building. He retired from LTSC in June 2012.

Susan Ahn Cuddy, a Korean American, was born to Dosan Ahn Chang Ho, and Helen Ahn, Korean independence activists, in 1915. They wanted to free Korea from harsh occupation of Imperial Japan. During World War II, she became the first Asian American woman to enlist in the U.S. Navy. She was an aerial gunnery officer at flight school. Amid sexism, Lt. Cuddy taught fighter pilots to maneuver in stimulators and to shoot down enemy aircraft. During the Cold War, from 1947 to 1959, Susan was a code breaker and intelligence analyst for the National Security Agency in Washington, D.C. As section chief, she managed a think tank of more than 300 agents working on the former Soviet Union. In her personal life, she blazed another trail. In April 1947, she married Chief Petty Officer Frank Cuddy, an Irish American. They defied anti-miscegenation laws at that time.

Dalip Singh Saund, an Indian American and Sikh, was born in Punjab, British India, in 1899. He arrived in the United States in 1920, penniless. He studied agriculture at the University of California, Berkeley. He eventually obtained master’s and doctoral degrees in mathematics. He successfully farmed lettuce in California’s Imperial Valley. He was a distributor of chemical fertilizers. Against racial discrimination, as a talented speaker, Saund campaigned for American naturalization of South Asians. He was elected Justice of the Peace in Imperial County. In 1956, voters elected him to the U.S. House of Representatives. He was the first Asian American in Congress. He fiercely supported civil rights and promoted better American relationships with Asian countries to stop communism. He served three terms in Congress.

Tram Nguyen, a Vietnamese American, was born in 1986 in Vietnam. In 1991, her family arrived in the United States as political refugees. She received a bachelor’s degree in sociology and American Studies from Tufts University and then her Juris Doctorate degree from Northeastern University School of Law. She served as legal aid attorney for Greater Boston Legal Services as an advocate for domestic violence survivors, workers, seniors, veterans and children. As the first Vietnamese American woman elected to office in Massachusetts, Tram serves as State Representative of the 18th Essex District since 2019. Her priorities include increasing local aid and improving public safety and health care.