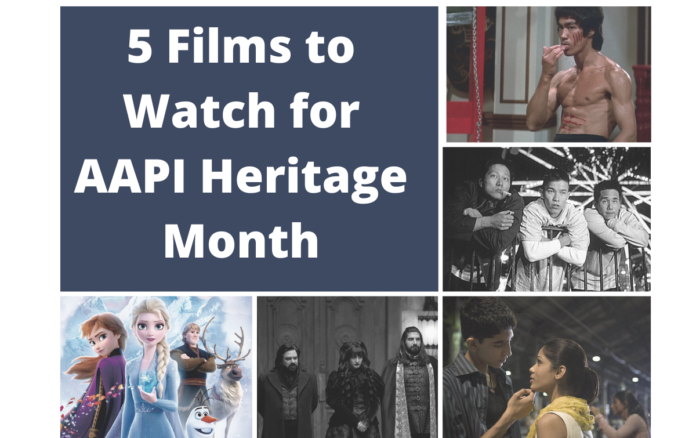 Too often Asian Americans and Pacific Islanders are erased from popular culture. These films show how AAPIs are part of popular culture, not only in the United States, but internationally as well.

Born in San Francisco, Bruce Lee (李振藩) was named one of the 100 most important people of the 20th century by Time magazine. Although he died in 1973, at age 32, his influence on sports, pop culture, movies, video games and even dance continues. Enter the Dragon was his Warner Bros. film, directed by Robert Clouse and released posthumously. Lee portrays a martial artist who, while instructing at the Shaolin Temple, is approached by a British intelligence agent to help investigate a suspected crime lord. It was selected for preservation in the U.S. National Film Registry by the Library of Congress in 2004.

You might be asking yourself why I’d choose this movie. Have I gone off my Disney princess rocker? But hear me out: The first Asian American to be nominated, and to win, the Oscar for Best Original Song was Robert Lopez, who is part Filipino, and his wife and partner, Kristen Anderson-Lopez. They wrote the song that you’ve undoubtedly heard Idina Menzel belt out, Let It Go, from the 2013 animated feature, Frozen. Lopez and Anderson-Lopez also won a Golden Globe for the song.

Frozen is about two sisters, Anna and Elsa. Realizing she has strange powers that could harm her loved ones, Queen Elsa runs away. Her sister Anna goes into a wintry landscape to find her, aided by an animated snowman Olaf, an iceman Kristoff and his pet reindeer Sven.

If you love Disney, also consider the 1942 Bambi, which features backgrounds and conceptual art by Tyrus Wong.

This is another award-winning film whose song Jai Ho permeated our everyday life when it came out in 2008. Indian filmmaker, singer and song writer A.R. Rahman was the first Asian to be nominated for three Oscars in the same year. Rahman wrote Jai Ho with Gulzar and they became the first Asians to win an Oscar for Best Original Song. Rahman also won Best Original Score for Slumdog Millionaire.

Slumdog Millionaire is a loose adaptation of the 2005 Q&A novel by Indian author Vikas Swarup, and tells the story of a young Indian Muslim from the slums who is one question away from winning a life-changing amount of money on a famous game show. Through flashbacks we are shown how he’s learned the answer to each question, and about his love for a woman who is the unwilling mistress of a crime lord.

Stuart Tay broke was murdered on December 31, 1992, by his supposed friends, all Asian American. The Orange County Register dubbed the crime, “the Honor Roll Murder,” and it inspired the 2002 American crime-drama, Better Luck Tomorrow. Directed by Justin Lin, it looked at the lives of Asian American overachievers who become bored and turn to petty crime. The cast included John Cho, Jason Tobin (who currently plays Young Jun in Warrior) and Sung Kang, now of Fast & Furious fame.

Lin, who wrote the script with Ernesto Foronda and Fabian Marquez, refused to whiten the cast for the original investors and had to raise the funds by using his credit cards. Kang brought in money through a frequent customer, Joan Huang of Cherry Sky Films, at the restaurant where he worked. MC Hammer invested money after meeting Lin at the Japanese American National Museum.

What We Do in the Shadows

Last year, Taika Waititi’s Jojo Rabbit was nominated for a Best Picture Oscar. Waititi not only directed the film, but also appeared in it as an imaginary Hitler. Before that, Waititi’s wacky sense of humor was on display in his vampire mockumentary, What We Do in the Shadows. Co-written and co-directed by Waititi and Jemaine Clement, the 2014 New Zealand film premiered at Sundance and is about four vampire roommates who share a flat in Wellington, the capital city of New Zealand. The roommates bicker and deal with the problems of finding blood, living with each other and socializing with other vampires. Waititi stars as one of the four central vampires. The film was popular enough to have two spin-offs: Wellington Paranormal in New Zealand and What We Do in the Shadows in the United States. The American series has been renewed for a third season on FX. Waititi and Clement are among the TV series executive producers.