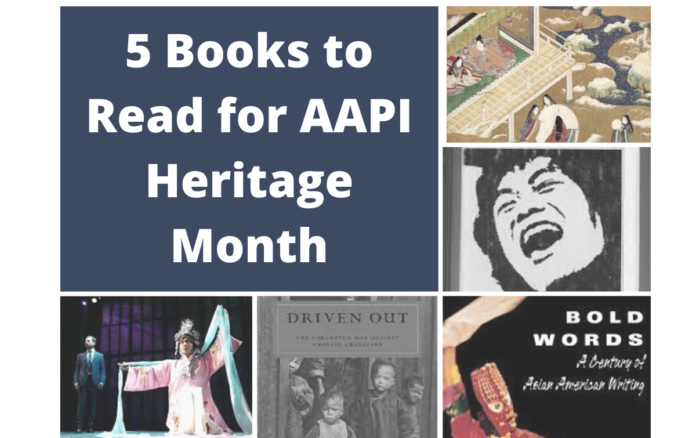 While it is impossible to pick five novels that encompass the rich tapestry of Asian American and Pacific Islander literature, here are five classics to celebrate AAPI Heritage Month.

A Literary First: The Tale of Genji

We should be aware of literary firsts. Murasaki Shikibu’s The Tale of Genji (or Genji Monogatari) is considered the world’s first novel and was written during the 11th century, Japan’s Heian era. (Sir Thomas Malory’s Le Morte d’Arthur wasn’t published until 1485.) The novel deals with the titular character, Genji, who is the son of an emperor, but not in the line of succession. He becomes a court officer, but mainly, the novel is about his romantic life. In the closing chapters, the novel follows his son. There’s the essence of karmic retribution in this psychological novel.

Preferably, try the Edward Seidensticker translation over the Waley, although I know there’s a new translation out.

What’s All the Fuss About? The Big Aiiieeeee!

If you’ve heard of The Joy Luck Club, then you need to read this anthology, The Big Aiiieeeee! The expanded version was published in 1991, but the first came out in 1974, and was edited by Jeffery Paul Chan, Lawson Fusao Inada, Shawn Wong and the infamous Frank Chin. The 1991 version includes Chin’s introductory essay, Come All Ye Asian American Writers of the Real and the Fake, in which he denounces Amy Tan, Maxine Hong Kingston and David Henry Hwang, the first Asian American to win a Tony Award. The title derives from the stereotypical cry used for Asian characters in old movies, comics and TV shows.

Are You Living in a Historic Anti-Chinese Town? Find Out by Reading Driven Out: The Forgotten War Against Chinese Americans

In 1885, around 60 to 100 Chinese were driven out of Pasadena, and fire was set to their businesses. That’s over a decade after the Chinese Massacre of 1871 in downtown Los Angeles.

Jean Pfaelzer’s 2007 book looks at what was happening on the West Coast during and after the South was dealing with Restoration. In the West, where lynchings targeted Latinos, Native Americans and Asians, waves of mayhem, massacres and mobs dealt with the other race issue, wiping out Chinese homes and businesses with a violent sea of hate.

The two editors (Rajini Srikanth and Esther Y. Iwanaga) of this 2001 anthology, published by Rutgers University Press, hunted me down because of a short story I had written for On a Bed of Rice. As a result, my first published short story is included in this anthology of 60 authors of Chinese, Filipino, Japanese, Korean, South Asian, and Southeast Asian American origin, with an even split between male and female writers. There is, as one might expect, some overlap between Bold Words and The Big Aiiiiiiiii! (e.g. John Okada and Carlos Bulosan), but both anthologies are worth having. Hopefully, both anthologies will leave you with a craving for more and give you options to explore.

You Know Madame Butterfly and Miss Saigon, But What About M. Butterfly?

David Henry Hwang’s deconstruction of Puccini’s Madame Butterfly hit Broadway in 1988, and won three Tony Awards, including Best Play, Best Performance by a Leading Actor (BD Wong) and Best Direction of a Play (John Dexter). Hwang was the first Asian American playwright to win a Tony, and Wong became the only actor to earn a Tony Award, Drama Desk Award, Outer Critics Circle Award, Clarence Derwent Award and Theatre World Award for the same role. Wong was the first Asian American to win a Tony for Best Performance for a Featured Actor in a Play for this role.

For the 2017 Broadway revival directed by Julie Taymor, Hwang rewrote the show, changing it from a three-act to a two-act structure. While technically not a book, the play is the thing. We read Shakespearean plays for our literature classes so why not read this play that tackles the East-West conflict.