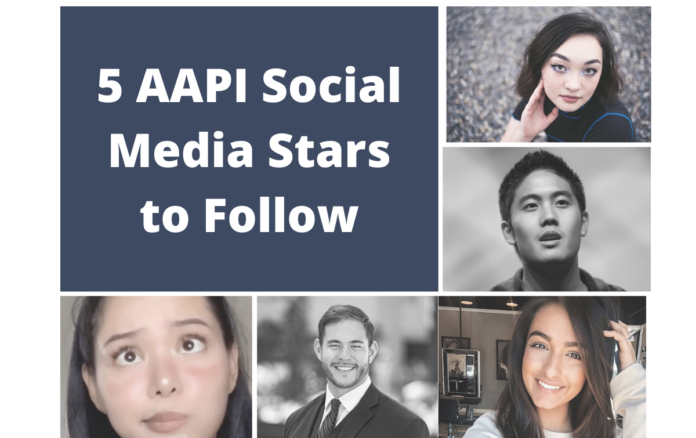 From TikTok to Instagram, these Asian American and Pacific Islanders social media stars have entertained and captivated millions of online fans and followers.

Mxmtoon (pronounced em-ex-em-toon, obviously!) is still barely out of her teen years, but already the hugely popular, self-described “artist/songwriter/actor/designer/gamer/simp” has written, performed, and produced four albums, many music videos, a stunning multimedia website, books, super cool clothing, irresistible line of merch (including a signature concert Uke), and more—all through an internet-fueled career she started from her bedroom under the nose of her parents.

This multi-talented polymath (she also plays multiple instruments from ukulele to trumpet) got her social media stardom start by posting homemade videos on Youtube in 2017. Just three years later, she has four complete albums in addition to a few new singles on Spotify, where over six million listeners tune in monthly.

In her Spotify artist description, she says she writes music to “lift people up and make them seen.” Her music “makes her fans feel understood and valued, especially those who share aspects of her identity” as a bisexual, mixed-race Asian woman, writes Carrie Ahlgrim in her interview with the social media star in The Insider.

Find mxmtoon on TikTok, Twitter, and all social media platforms @365daysmxmtoon, and get a daily dose of her humor, talent, wisdom, and joy on her podcast “365 days with mxmtoon.”

Bella Poarch is known for not only being the biggest star on TikTok with a following of more than 69.2 million, but also for her mysteriousness. Not much is known about her real name, age or background. She began her TikTok channel in April 2020, and amassed a huge following with her video lip synching to the song “M to the B” by British rapper Millie B. She signed a record deal with Warner Records, and recently released her debut single “Build A Bitch.”

Ryan Higa, also known as nigahiga, is a YouTube star most known for his comedy. He is an internet personality, musician, comedian and actor from Hilo, Hawaii. Higa began his career in 2006 using YouTube as a platform, and quickly became one of the most popular and well-known creators of his time. He currently has more than 21 million subscribers.

Adam Juratovac (@adamjthelawyer) is a California lawyer and community activist in San Jose, Calif. Although Juratovac has been on social media for several years, during the past year, he has amassed more than 400,000 followers on TikTok by sharing California employment law-related tips. Most recently, he has been advocating for #StopAsianHate and organized two community rallies in San Jose. You can find him on all social media platforms under his handle, @adamjthelawyer.

You’re doing something right if you have nearly 400,000 followers on Instagram. Nita Mann describes herself as a law school grad and mom to baby Kaiyen. Her posts are sprinkled liberally with lots of pics with her cutie while managing to maintain a strong fashion sense. Her blog features a lot of shopping opportunities and bargains. So if you like babies and shopping, Nita may be for you.