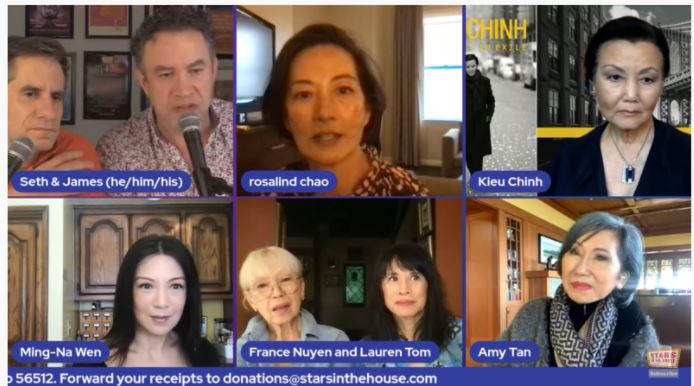 Nearly 30 years after the film’s release, the cast and writer of The Joy Luck Club reunited on the live-streamed series Stars in the House in honor of Asian American and Pacific Islanders on Friday night.

Hosted by SiriusXM host Seth Rudetsky and his husband, producer James Wesley, the 90-minute reunion included a conversation with actors Kieu Chinh, France Nuyen, Ming-Na Wen, Lauren Tom, Rosalind Chao, and writer Amy Tan during which they reminisced about the groundbreaking film and discussed the significance of the story.

“Just being represented on screen is so healing for young people, so hats off to Amy for giving us the opportunity to be on the screen so that younger people who are watching it, they think ‘Oh, well if she can do it I can do it’ and ‘I am represented. I matter in the world,’ said Tom.

Based on some experiences from Tan’s life, The Joy Luck Club follows the stories of four families and explores the relationships between Chinese-American women and their immigrant mothers. During the event, the actors talked about their careers as Asian women and how they were cast in The Joy Luck Club. They all agreed that the book and the ways it depicted Chinese mother-daughter relationships was a very relatable story for them.

“The Joy Luck Club [and] all these Chinese sayings and words were just things that we hear all the time and we didn’t really give it any value or any thought. And yet in [Amy’s] book, [she] enlightens us with the real meaning or actual interpretation of those words and those sayings. I think that is what made it like, ‘Wow, somebody is speaking about my life in such a deep way.’ It was such a connection and I think that’s what made The Joy Luck Club such a special book for many of us,” said Wen.

Wen said that the stories in the book and film covers all cultures, generational gaps, backgrounds. She related it to a comment Tan had made about how the more specific personal something is, the more universal it becomes. Throughout the event, scenes from the movie were played, followed by a discussion with Tan about the experiences in her life that connected to them and what it was like for the actors to act in those scenes.

In one scene from the movie, the husband of Tom’s character makes her divide their expenses and tapes the list to the fridge. Her mother, played by Nuyen, finds the list, which results in a confrontation between the two of them.

“The quality of [Tom] is something that is very rare in performers, and her vulnerability is very fragile. It’s very hard to find someone who can do that. It was almost like a protective aspect that came out of me [in the scene] that [made me] really want to protect her [and] I didn’t know what to do. The frustration was there but it was because she caused it as a performer,” said Nuyen.

In discussing their acting careers, Wen talked about how the landscape of Hollywood has changed for Asian Americans.

“It’s definitely changed, and not just that we have to play war victims or dealing with issues that are more specific to each of our cultures. It’s expanded where now Asian Americans are just being able to be seen as any other Americans in many different roles. It’s still small and limited but it’s definitely a lot better than what it was,” said Wen.

Towards the end of the event, the actors talked about the legacy of The Joy Luck Club, the crew that made it all happen, and how honored they were to have been a part of it.

“The Joy Luck Club was chosen by the Library of Congress and taken as a classic. It took them 35 years but it’s done and it’s very important and everyone should be proud of that. It is a frontier that all of you have accomplished and literally stepped back into a new century and a role for everyone who has a heart and a mind and an emotional and a feeling of stability and peace,” said Nuyen.