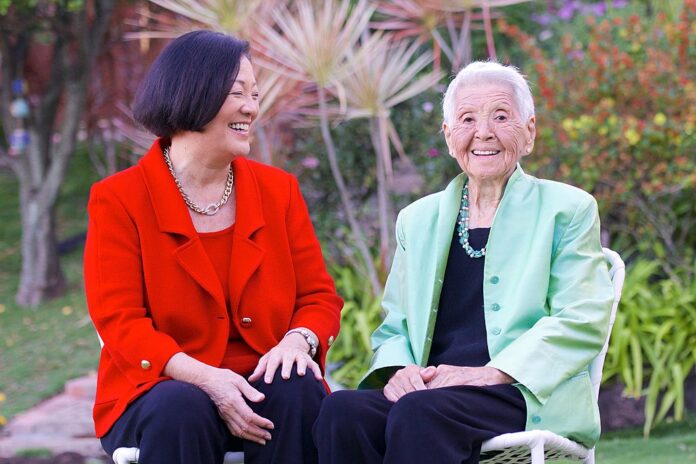 Hirono’s memoir Heart of Fire: An Immigrant Daughter’s Story is an emotional recollection of her life as an immigrant, from childhood to present-day.

“I would say that the Heart of Fire is about perseverance, determination, taking risks, continuing to show up,” Hirono said in an interview with AsAmNews.

“There aren’t that many people that can think of someone when you say name one person who has changed your life,” Hirono said. “But for immigrants like me, coming to this country totally changes our lives, and in this case, my mother made that happen.”

Hirono and her two brothers were born in Japan. After leaving an abusive marriage, Laura brought Hirono and her older brother to Hawaii. The youngest brother, 3-year-old Wayne, stayed in Japan with his grandparents.

In Heart of Fire, Hirono writes about how her mother’s courageous decision to leave Japan impacted her life. She also describes the milestones and achievements her mother experienced with her. Laura was present at Hirono’s first Congressional swearing-in ceremony.

Unfortunately, Laura did not live to see the publication of book. She passed in April on the day Hirono received the first hard cover copy. Hirono believes her mother would have been proud.

“I had the book cremated with my mom, and I told her, ‘Mom, I wrote a book for you, and you are going to take it with you,’” Hirono said. “That is a comfort. I believe that she knows.”

Throughout the book, Hirono relives both joyful and painful memories. She discusses the life of her younger brother Wayne, who struggled with a fear of abandonment after being left behind when the family first moved to Hawaii. Wayne died in his early twenties after a fishing accident. Hirono said writing about her brother’s “very short, tragic life,” was “the hardest part.”

“That remains hard to this day…” Hirono said.

A Washington Post review of Hirono’s memoir called the sections discussing her political life “more guarded and less compelling.” Hirono, however, says she never intended for the book to be a highlight reel of her political career. She does not even like to refer to that part of her life as a career.

“I’ve never referred to what I do as a career,” Hirono said. “I view it as my public service life. [The book] was not going to be a recitation or a disclosure of major things.”

Chapters about politics are often intertwined with Hirono’s own personal experiences. When discussing immigration policy, for example, Hirono often references her own immigrant experience.

“Those [issues] are all very much very personal and real to me how we treat immigrants in our country,” Hirono said. “That lived experience is conveyed in my memoir.”

“For a lot of women, and for Asian women in particular, speaking out and vocalizing, those are not behaviors that are necessarily encouraged in us,” Hirono said. “Being vocal. Being aggressive. These are not traits that are particularly rewarded especially when coming from an Asian woman.”

“To overcome those kinds of limitations, it was a journey for me. I hope there are women and especially AAPI women who can relate to that part.”

The final chapter of the book talks briefly about the issues that have arisen during the pandemic, like increasing anti-Asian hate and discrimination. Hirono says the final chapter is not “the end of the story.” The pandemic continues to take lives, and hate against AAPIs has not slowed down.

The Senator told AsAmNews that she is encouraged by the number of young AAPIs who have stood up for their community.

“It’s very encouraging and a sign of much hope, but we have to stay the course and half the battle is staying the course and continuing to show up,” Hirono said.