Time is running out for California Governor Gavin Newsom to rally his base of supporters against his upcoming recall election. In the coming days, Californians will receive mail-in ballots, due by the September 14th special election.

Though California has an overwhelming number of registered Democrats in comparison to Republicans, Newsom is not taking any chances with the controversial recall process. The Newsom team has been campaigning throughout the state to get the vote out, and has given special attention to the AAPI communities, who he says, “got him elected.”

“I am very proud of this state, where 27% of us are foreign-born. We’re majority minority-born. We celebrate, we don’t just tolerate that diversity,” said Newsom.

The Governor talks of his commitment to protecting Asian American communities.

“We’ve been very consistent in calling [anti-Asian hate crimes] out, and using the bully pulpit…and I was one of the first governors in the country to do that and push back against Trump and the rhetoric he was spewing as it relates to anti-Asian hate.”

In an AAPI-focused press conference Wednesday, CA Attorney General Rob Bonta joined Governor Newsom to make the case for voting against the recall.

Bonta, was born in the Philippines, then raised in American by activist parents. His interest in justice and advocacy led him to study law at Yale, then serve San Francisco as Deputy City Attorney, before becoming the first Filipino American elected to the CA state legislature. In April 2021, he became the first Filipino American, and only the second Asian American, to serve as California’s attorney general.

In opening remarks, Bonta expressed wholehearted support for Governor Newsom to continue his term. He described Newsom’s quick response to the COVID-19 pandemic, his adherence to scientific recommendations, and his rebuttals against Donald Trump’s anti-Asian rhetoric as reasons for Asian Americans to support Newsom. 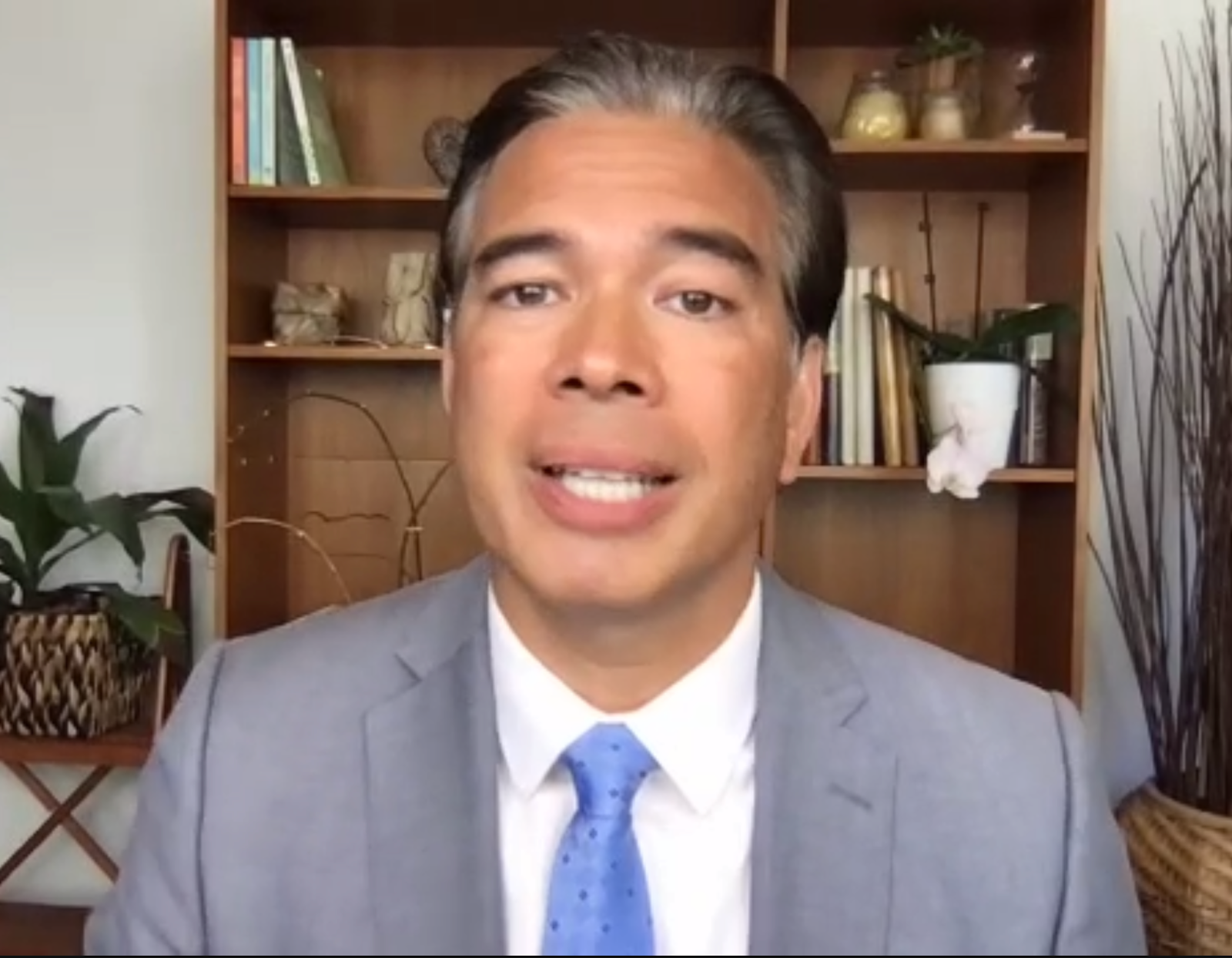 He also cited Newsom’s aggressive vaccination efforts as key to protecting public health, including the health of vulnerable Asian Americans. “Nothing is more important to API families than our health and health of our loved ones and families and countless lives have been saved by our Governor’s decisive actions and his courage.”

Bonta continues, stressing the importance of the election, “All of that could be taken away if this recall is successful. The stakes could not be higher.”

AsAmNews reached out to the California Republican Party which is supporting the recall effort. It did not get back to us by deadline.

The California recall process is a mechanism for the public to remove an elected official from office before the term’s end. A certain number of voters must sign a recall petition within an allotted to start the process. Because two of the last three democratic governors have been challenged by recall, some democrats claim the GOP is abusing its right.

Furthermore, others claim the process is downright unconstitutional. New York Times Opinion dives into the nuances of a seemingly simple, two-question ballot: Should Gov. Gavin Newsom be recalled and removed from office? If so, which of the candidates on the ballot should replace him?

The NY Times article details a realistic situation, given current polling. “Imagine that 10 million people vote in the recall election and 5,000,001 vote to remove Mr. Newsom, while 4,999,999 vote to keep him in office. He will then be removed and the new governor will be whichever candidate gets the most votes on the second question. In a recent poll, the talk show host Larry Elder was leading with 18 percent among the nearly 50 candidates on the ballot. With 10 million people voting, Mr. Elder would (possibly) receive the votes of 1.8 million people. Mr. Newsom would have the support of almost three times as many voters, but Mr. Elder would become the governor.”

Some have suggested a federal lawsuit to stop the entire election. Others says Newsom’s name should be added to the second question, allowing his supporters to show their support for him over the other candidates.

In the meantime, Newsom is focused on winning the election as is. He tells his supporters to simply answer “no” to the first question, leave the second blank, and return the ballot.

Although California is an overwhelmingly blue state, Newsom’s democratic base is simply not as enthusiastic about the upcoming election. Many are unaware that it is happening, and still others are complacent, believing Newsom will easily win without their vote. “Recent polls show that more voters oppose Newsom’s recall than support it, but an enthusiasm gap between Republican and Democratic voters has created uncertainty,” CNBC reports.

Because Newsom has more support than not, he is focusing on convincing his own base of the importance of their vote, rather than swaying his opposers.

Understanding the AAPI community’s lower, but growing turnout rates, Rob Bonta reminds: “We cannot be complacent. Elections are not spectator sports. We need to exercise our fundamental right to vote, our vote is our voice, and we need to make sure we each do our part to beat back this cynical Republican recall effort.” 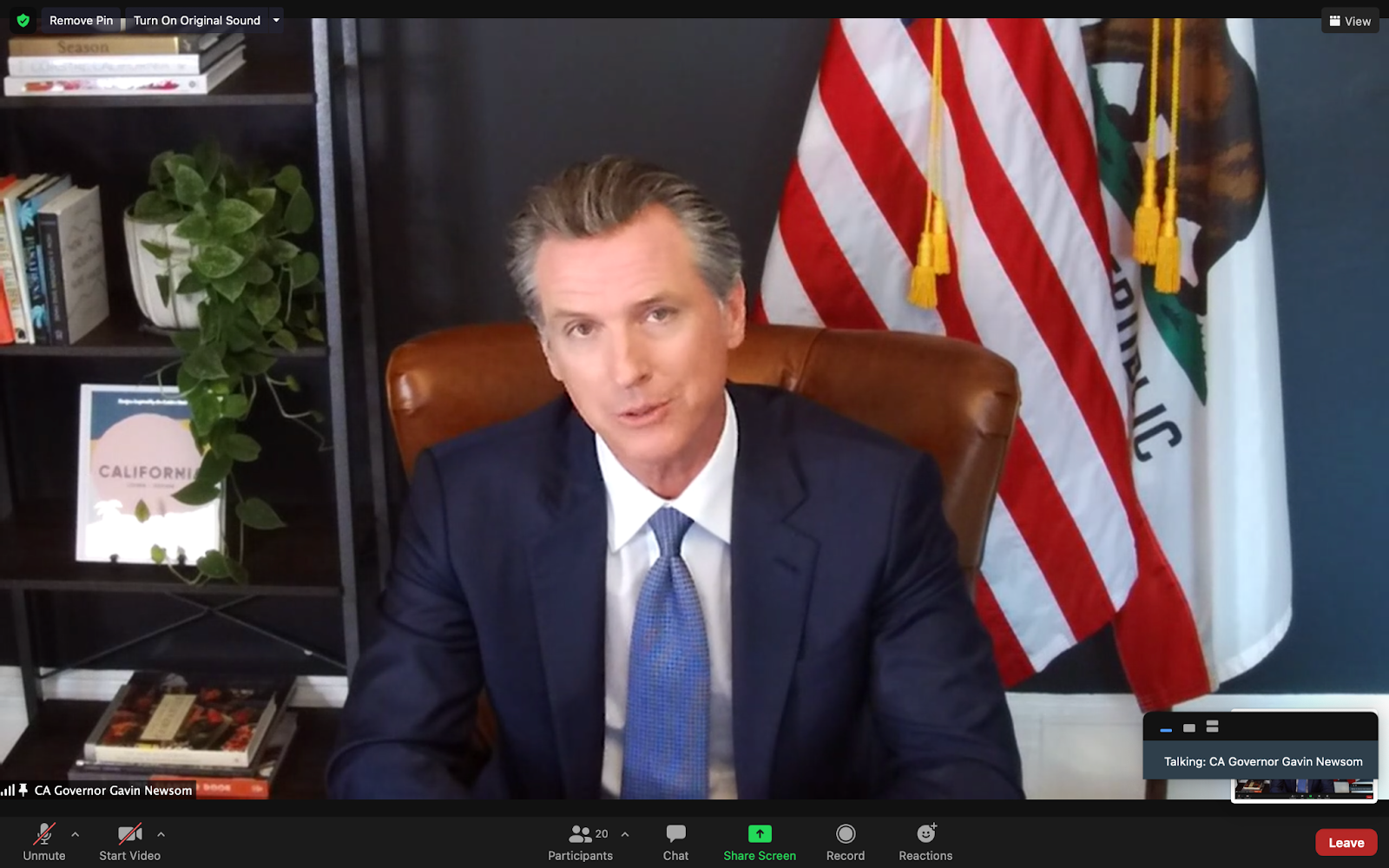 Governor Newsom began the case for his continued governorship by describing California’s success under his watch. According to a Bloomberg report, he claims, “the economy in the state of California in the last five years has scored a 21%. That’s the fastest growing economy of all Western democracies.” He also mentions billions the CA government provided in small business grants, the large tax rebate, and paying 100% of back-rent and utilities for those in need.

“I signed a bill just last week that directly benefits AAPI communities by expanding health care, in-home services, and long term care for people regardless of immigration status, recognizing how many mixed status families we have within the AAPI community. $200 million went up in a program where we are providing grants for evidence based street outreach to deal with the issue of crime and violence, particularly perpetuated against our diverse communities. By the way…last year that budget was $9 million.”

Radio host Larry Elder is the highest polling Republican running for this election.

Newsom incredulously describes Elder. “The leading candidate, the one that is almost certain, if we lose, to be your next governor, not only promotes and supports Trump. But was out defending folks and has the support of people who were insurrectionists, including people who were arrested on January 6th. He doesn’t believe in a minimum wage at all, zero dollars! He doesn’t believe women are as smart as men. He wrote an op-ed claiming that.”

Newsom has 33 more days to remind his voters why he was elected in the first place, and to convince them to submit their ballots.

Memorial Held for Sheriff Recruit David Nguyen, Who Was Shot and Killed on Freeway

Asian Am group gives thumbs up to affirmative action in college

The Gold House Promotes API Creators for Awards and at Sundance

Reflections: 2021 in the rearview mirror.

Memorial Held for Sheriff Recruit David Nguyen, Who Was Shot and Killed on Freeway

Asian Am group gives thumbs up to affirmative action in college