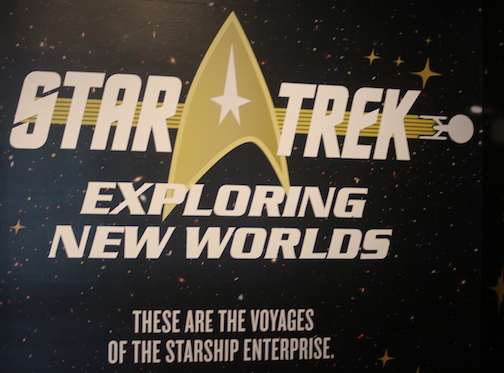 On Star Trek Day this year, I did shed a bitter rain on the Trekkie parade, tweeting:

For Star Trek Day, a few lucky, dedicated fans got in early to see the Seattle Museum of Pop Culture’s exhibit: Star Trek: Exploring New Worlds at the Skirball Cultural Center in Los Angeles. The press view was later in September and the exhibit finally opens to the public this week (October 7, 2021 to February 20, 2022).

The exhibit has been on a five-year mission to spread the joy of Star Trek nationwide. The exhibition originally opened in Seattle (May 2016 to May 2018) and the Skirball will be the last stop for the exhibition which consists of over 100 relics, set pieces, costumes, props, scripts and videos. Most of the costumes and props are being rented out by private collectors. After the Los Angeles exhibition ends, these will be returned. Who knows when anyone will be able to amass a collection like this again.

The Star Trek exhibit is family-friendly and doable in a few hours. It begins with a timeline that compares real-time and Star Trek history. You can participate and discuss with friends while playing with the interactive exhibit on scriptwriting. There are, of course, opportunities to sit in a TOS captain’s chair and meet tribbles for a selfie opportunity. You and your friends can also act out three different scenarios after being “beamed” up and out of an adventure.

In December, at the other side of town, the Los Angeles Comic-Con will be beaming on to the mission with a Star Trek theme.

Despite the many examples of Star Trek inspiring individuals and discoveries and innovations that shape our lives today, there are some minor quibbles that have nothing to do with tribbles. The exhibit Star Trek: Exploring New Worlds reminds us as Asian Americans that although Khan is an Asian surname that is found from Turkey to Central and South Asia and remains one of the most common surnames in the world and is associated with Turkey, Iran, India, Pakistan, Afghanistan and Bangladesh, neither iteration of the fictional Khan Noonien Singh was played by anyone remotely of Asian descent.

The original Khan was portrayed with astonishing aristocratic anger by Ricardo Montalbán in the 1967 TOS episode Space Seed and again in the 1982 film Star Trek II: The Wrath of Khan. In the 2013 film Star Trek Into Darkness, Khan was portrayed by a very White Benedict Cumberbatch. With Dev Patel getting awards nominations and awards for his performance in the 2008 Slumdog Millionaire and with Chow Yun-Fat having already starred in a major money-making film speaking English (the 1999 Anna and the King), the talent was obviously there. Patel would have been 23 in 2013. Chow would have been 58. Montalbán was 47 and 62 when he portrayed Khan. Cumberbatch was 37.

We have seen TOS Sulu (portrayed by George Takei) as a captain (not part of this exhibit) of the USS Excelsior in the 1999 film Star Trek VI: The Undiscovered Country, and while there have been other characters of Asian descent in the other Star Trek series, we have yet to have an actor of Asian descent play a lead role and be the central figure (and highest paid actor with top billing) of a Star Trek series.

Still, Star Trek raised Takei to a level of pop culture popularity that brought more attention to the Japanese American and Asian American communities as well as to the LGBT communities. Without TOS Star Trek, I doubt that this would have been possible. That means without TOS Star Trek the musical that was a smash off-Broadway at the San Diego Old Globe, Allegiance, would probably not have gotten made in 2012 and then not made it to Broadway (2015-2016) or become a filmed performance.

TOS Star Trek was a launching point, but there’s still an unexplored world where men and women of Asian descent can see themselves as captains and heroes and even the best villains of iconic series like Star Trek. It’s not enough that the Vulcans were a twist on yellow-faced White actors, a practice common during the TOS decade. And it’s hard to forget that characterization of Genghis Khan in the TOS episode, “The Savage Curtain” (as portrayed by Nathan Jung).

It’s been 55 years of Star Trek and we haven’t found a new world that acknowledges that 20 percent of Earth’s population is of Chinese descent We haven’t even added in the Japanese, Koreans and Mongolians. On Earth, Asia accounts for 60 percent of the world population. A Star Trek that casts roles accounting for those two things would be a new world indeed.  That may be the next five-year mission for Star Trek and one hopes that Star Trek will boldly go there soon.

LA Comic-Con will be held 3-5 December 2021 at the Los Angeles Convention Center.