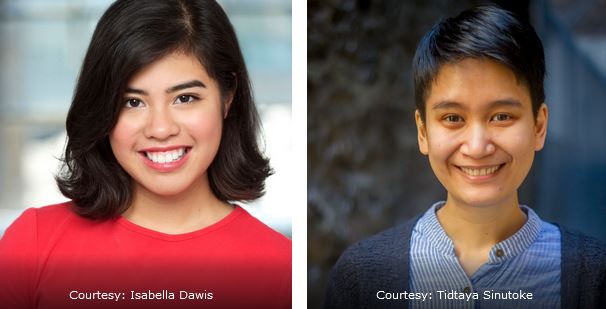 The Fred Ebb Foundation has named the composer/librettist team of Thailand-born Tidtaya Sinutoke and Filipina American Isabella Dawis as the 17th annual recipient for excellence in musical theater.

This year’s award is the first to go to an Asian American female writing team whose works foreground Asian American stories and characters. The award is designed to encourage outstanding songwriters who have yet to attain major commercial success.

The annual award is “fiercely competitive,” explains Mitchell S. Bernard, nephew of the iconic Broadway writer, lyricist, composer, and director Fred Ebb, the award’s namesake. Bernard tells AsAmNews that the duo’s work stood out from a field of over 300 applicants as “courageous in subject matter, unconventional fare for musical theater, marked by a high level of creativity and musical boldness and craft.

“With this award, which comes with a cash prize as well as networking and mentorship opportunities, we seek to nourish the next generation of songwriters who will be able to alter and carry forward the traditions of musical theater,” says Bernard.

Sinutoke and Dawis are also the first Asian American artists to win since 2008 when Adam Gwon, who is Chinese American and Jewish, received the award.

“This award helps to make our visions palpable,” said Dawis to AsAmNews. “We carry our dreams in our back pockets most of the time and this award reassures the people who love and support us that these dreams are valid.”

Sinutoke, a composer, and Dawis, an actor and classically trained musician, have been collaborating for more than three years.

“Tidtaya’s work immediately stood out for me. As a pianist myself I could see that her craftsmanship and musical knowledge were outstanding. She has a remarkable fluency in different musical styles and a chameleon-like ability to imitate different musical idioms,” said Dawis.

For Sinutoke, working with Dawis has been equally inspiring. The composer explains to AsAmNews, “you really cannot train a good storyteller. Or rather, what Isabella is capable of doing is something beyond what they can teach you in school. I am so grateful, not only for her performance talents but for her lyricism and storytelling.”

The duo have completed one show and are working on a second, each featuring an Asian American woman heroine. Their first collaboration, Half the Sky,” tells (and sings) the fictional story of Aurelie, a Thai American woman who, in the aftermath of her sister’s death, sets out to conquer her dream of summiting Mt. Everest.

You can listen to A591 from Half the Sky in the YouTube clip below.

“Many people don’t realize that the first woman mountaineer to successfully climb Mt. Everest was Junko Taibei from Japan,” Sunutoke explains. “In fundamental ways we seem to always be forgetting, the ‘Everest’ story is an Asian story. With this production, we are trying to bring that kind of writing and character–an Asian American woman lead–into the musical theater world.”

For their second musical collaboration, it was Dawis who tapped Sinutoke to be her collaborator.

“I was researching Asian women in science and came across the incredible story of Hisako Koyama, a self-taught solar observer who fell in love with the sun to such an extent that she literally hand-drew its astronomical image every day for 50 years,” Dawis said.

It quickly dawned on her that she had stumbled upon a story that needed to be shared.

Koyama’s story speaks to “the desire to reach out beyond the confines of our limited lives to connect with a wider community,” Dawis believes.

Currently in development as a one-act chamber musical, the play entitled Sunwatcher is inflected with Noh drama elements, complete with an all-female Asian cast and artistic crew.

The fearlessness and joy with which Sinutoke and Dawis imagine and create roles and plots for Asian Americans might be stoked in part by their personal and artistic backgrounds.

Sinutoke grew up largely in Thailand, “where I studied traditional Thai music from a music teacher at my mom’s university while also learning piano and western music in Bangkok,” she shares. Instead of a typical high school, she attended an intensive pre-college music program at Mahidol University (one of Thailand’s top universities) where she had the opportunity to learn from music professors from all over the world until coming to the U.S. for her senior year in high school and then attending Berklee College of Music and NYU to study music and musical theater writing.

Dawis herself grew up in the auspices of the groundbreaking midwestern Asian American theater company, Theater Mu of St. Paul, Minnesota, founded in 1992 as an incubator for a “unique blending of Asian and Western artistic forms in the expression of Asian and Asian American stories and music” After starring in the title role of “Annie” for a local dinner theater, Dawis would take on the role of a Korean American adoptee named Annie in Theater Mu’s premiere of “The Walleye Kid: The Musical,” a production based on the reflections and experiences of the Korean adoptee community in Minnesota, one of the largest in the country.

Both Dawis and Sinutoke are drawn to the way musical theater serves as a particularly powerful platform to stage Asian American stories for a modern, multicultural audience. In the case of Theater Mu’s “The Walleye Kid: The Musical,” for example, Professor of Music Lei Ouyang Bryant argues that the genre of musical theater is the perfect American vehicle for this Korean American story.

For Dawis and Sinutoke, the world of musical theater is one in which the ordinary and everyday can suddenly “break into song,” elevating language and expression “beyond the level of mere speech.” As we go to press the Omicron variant-fueled outbreak is shuttering musicals up and down and beyond Broadway, and has forced cancelation of the award ceremony planned for Birdland on January 3, 2022, which will now be held sometime this spring. Even so, this recognition of outstanding Asian American talents signals a major change of tune for the nation’s musicals and we can hear Asian America singing!