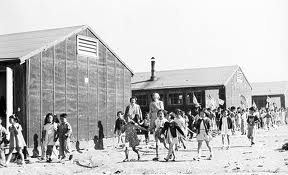 A bipartisan bill to educate the public about the incarceration of Japanese Americans during World War II failed to gain the support of 16 Republicans, reports The Hill.

“The power of history is to gain perspective and learn from our past. By bringing transparency to the story of Japanese American internment, we can ensure such injustice never again occurs within our country,” Obernolte said in a statement.

According to the Victorville Daily Press, the National Park Service would create an interactive map pinpointing the location of the prison camps and include brief information about each site and details about whether the sites are open to visitors.

A spokesperson for Lamalfa told The Hill he had concerns about lack of infrastructure in some of the areas to support tourism.

Harris said there are more pressing priorities while Roy said this is best handled by charities and not the federal government.

“Many of you have heard about how many Issei and Nisei generations often did not talk about their camp experiences with their children and grandchildren,” said Bruce Saito of Friends of Manzanar said in a statement. “Such was my case, and [that’s] one of the reasons I think creating the Japanese American World War II History Network is so important. We must continue to strengthen the network and continue to connect the dots through the network so this tragic and very important lesson in history is never forgotten.”