Analysis: Rep Michelle Steel has a curious definition of racism 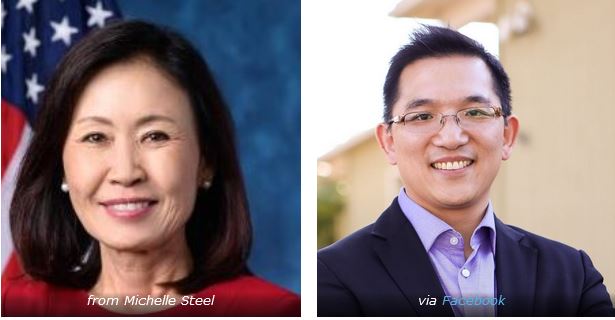 Listen to the 13-second YouTube clip being promoted by Republicans who accuse congressional candidate Jay Chen of mocking the Korean accent of Rep. Michelle Steel.

Absent in that clip is any hint of Chen making fun of Steel or her accent. It’s the typical back and forth banner heard in many political campaings.

Yet here’s the release sent out by the Republican party:

“Chen’s racist characterization of her accent is a total affront to the Asian Pacific American community. Nobody in America should be mocked because of their heritage.

“Republicans embrace Americans of all backgrounds while Democrats continue to divide by race.

“Democrats are proving once again that unless you fit their narrative and agree with them, you are fair game for racist attacks. Congresswoman Michelle Steel is an inspiration to the Asian Pacific American community and is proof that the American Dream is real. Jay Chen’s despicable comments are totally out of line, and he should apologize for using such racist language.” – RNC Spokesperson Nainoa Johsens

She switched to run for the 45th after the new political boundaries were finalized.

Democrats have a 5% voter registration advantage in the district. Republicans apparently believe Steel can win some of them over by throwing out accusations of racism.

That would be normally true, but the accusation has to be accurate. Most who bother to listen to that 13 clip will know that’s not racism.