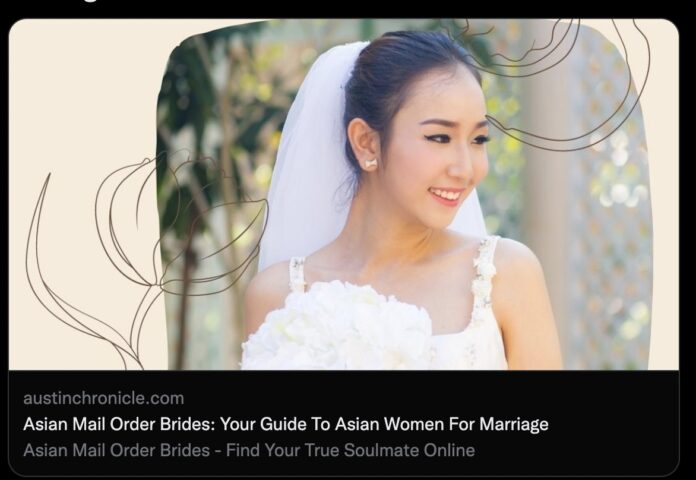 The posts have been appearing in alternative newspapers like the Austin Chronicle, the East Bay Express and SF Weekly.

Sheena Yap Chan is the co-founder and host of a podcast called The Tao of Self Confidence where she interviews Asian women about their inner journey to self-confidence. She has set up Google alerts to receive updates about news regarding Asian women. Last week, she received an alert for a sponsored post published in the Austin Chronicle.

The title of the post read: “Asian Mail Order Brides: Your Guide to Asian Women for Marriage.”

“I saw it and was like this is degrading. This is terrible. It was literally a manual of how to get an Asian Mail Order bride,” Chan said in an interview with AsAmNews.

The Austin Chronicle’s post was sponsored by a website called “Mailorderasianbrides dot org.” It also included a list of websites where you could find Asian mail-order brides. The weekly paper has published similar sponsored ads before.

Chan posted the article on Twitter and Linkedin. She brought it to the attention of Asian activists who had larger platforms and the post went viral. The Asian community was outraged.

The Austin Chronicle’s post came on the same day the Supreme Court announced it was getting rid of the constitutional right to abortion by overturning Roe v. Wade. The decision has impacted many women.

“[The Austin Chronicle post] came out the same day Roe v. Wade got overturned,” Chan said. “So it just added more fuel. Not only were people p*ssed about Roe v. Wade, they got even more p*ssed seeing that get posted on the same day.”

The post in the East Bay Express is sponsored by a website called “Tigers of Tinder.” It is unclear who sponsored the posts in SF Weekly.

On Friday, June 24, The Austin Chronicle posted an apology on Twitter.

“We appreciate your comments and for calling us out for advertisements that we believe do not reflect Chronicle values or our mission as a progressive newspaper. We apologize for having this ad on our site,” the statement read. “Going forward we will not host any mail-order bride sponsored ads, and we will be having vigorous internal conversations about past and future sponsored posts.”

Chan felt the apology was disingenuous.

“If they were really sorry they wouldn’t have taken it to begin with,” Chan said. “They don’t understand the trauma Asian mail-order brides go through.”

Dave Lu, the founder of an organization supporting Asian American entrepreneurs called Hyphen Capital, noted that SF Weekly had not taken down sponsored posts advertising Asian mail-order brides. The weekly paper has not published one of the sponsored posts since 2021. However, the posts appear to have been deleted as of this morning, June 28.

AsAmNews reached out to The Austin Chronicle and SF Weekly to gain insight into the decision-making process that led to publishing the sponsored posts. We have not received a response but will continue to update this story.