Over 150 community members gathered outside the Muskego’s Educational Services Center in Wisconsin to protest the school board’s decision to ban Julie Otsukua’s award-winning 2002 novel, When the Emperor Was Divine.

They held a teach-in to hear from youth, educators, and community leaders. Bearing signs reading “Teach the Truth in Muskego,” “Let Teachers Teach,“ and “Support Inclusive Education,” the mood at the teach-in was defiant and jubilant as Muskego-Norway school board members looked on from the sidelines and walked past to go inside for its first meeting since the ESC action.

Notes from that June 13th meeting of the Educational Services Committee taken by an attendee (inexplicably, the committee itself does not record or publish its own notes) show that the committee members who summarily rejected the book, which had made its way successfully through a lengthy review process, alleges that they did so for a simple reason: they do not realize–or rather, they refuse to accept–that Asian American history is American history.

Wisconsin 2022 Teacher of the Year Kabby Hong was one of the featured speakers at the teach-in. Hong works at a school about 90 minutes away from Muskego in the town of Verona. He first learned about the Muskego-Norway school board incident from a tweet by the AAPI Coalition of Wisconsin, a new statewide effort coordinating Wisconsin’s AAPI leaders and community members against anti-Asian hate and racism.

“The tweet made me so angry,” Hong tells AsAmNews.

Hong, who has been teaching high school English and Composition for 20-plus years, is Wisconsin’s first Asian American to receive the honor of Teacher of the Year. The words and actions of school board members in the neighboring district was a shock to his system.

“It reopened an old wound in me that will never heal,” Hong says, “one that all Asian Americans are familiar with: when someone questions whether or not you are actually American.”

“Board members justified rejecting Otsuka’s novel using the language of needing the ‘American perspective,’” Hong explains, “as if Japanese American history and experience are foreign, rather than integral, to the American story.”

Hong felt the responsibility as an educator to personally reach out to the Muskego-Norway school board to request time to speak at their next meeting, hoping to inform them about the educational value of the novel, which is already taught in dozens of school districts around the country. His request to appear before them was rejected by the board.

With the school board seeking to shut down public discussion of their words and actions, a rapid response was championed by Muskego parents, alumni, students, and other community members who lept into action, writing an impassioned statement critiquing the decision that has garnered well over 300 signatories, about one-third belonging to current and former students; launching a fundraiser to purchase and distribute 100 copies of the novel; reaching out to organizations like the Japanese American Citizens League for support; planning a community book club to read and discuss Otsuka’s novel; and organizing the July 18th community teach-in.

“We are here because of the board’s indefensible opposition to Julie Otsuka’s award-winning novel,” community member Ann Zielke told the crowd at the start of the teach-in. “We are here to let the board know that we will not stand for racism, exclusion, erasure, or white-washing of our history.”

Zielke closed the event reading a comment from author Julie Otsuka reacting to the school board’s apparent disdain for diverse stories. “Reading stories from a diversity of communities is a radical act of empathy and can only serve to benefit all students,” Otsuka said. “It’s how we learn to be more compassionate human beings, by reading about people who are different from us.”

In addition to inspirational and informative presentations refuting the illogical, ignorant, and contradictory statements given by school board members seeking to rationalize their actions, and after uplifting lessons in history, educational policy, literature, and community-building, organizers shared several concrete asks of the Muskego-Norway School Board:

each school board shall provide an instructional program designed to give pupils:

7. An appreciation and understanding of different value systems and cultures.

8. At all grade levels, an understanding of human relations, particularly with regard to American Indians, Black Americans and Hispanics.

“When Act 31 was being legislated in the late 1980’s, Asians were deliberately left out of the list because of the animus of Wisconsin’s majority White population toward the state’s small but growing Hmong community,” explains Ron Kuramoto, President of the Wisconsin chapter of the Japanese American Citizens League (JACL).

“For the last thirty years, Asian American history has been targeted for exclusion from the curriculum in our state,” remarks Kuramoto, who is a member of the AAPI Coalition of Wisconsin and who also served as a featured speaker at the teach-in.

Wisconsin seems to be building momentum toward finally addressing this legislated ignorance. Wisconsin’s first Asian American legislator, Francesca Hong, is co-sponsoring a bill that would amend the Act 31 statute to include “Hmong Americans, and Asian Pacific Islander Desi Americans,” and the AAPI Coalition of Wisconsin recently launched a statewide campaign to require inclusion of an AAPI curriculum in all K-12 schools.

“Unfortunately, radical conservative activist groups like “No Left Turn” and other so-called “concerned parents” are targeting every book or teacher who stands up for any form of diversity,” laments Kuramoto. “On the other hand, there are so many parents who genuinely care about the quality of education for their students and who understand that the real history, beauty, and strength of America is in its diversity.”

The lesson playing out in the city of Muskego, WI , a small predominantly White suburb of Milwaukee that voted 2:1 for Trump in 2020, is that education matters and education works. Muskego proves that efforts to erase history and suppress voices can be met with teach-ins, petitions, rallies, book clubs, and community-building. These efforts might not lead to the school board doing the right thing, but they have achieved something perhaps even greater in galvanizing a community and many others across the nation to keep pushing for truth and justice in education.

“The school board’s discomfort with teaching and learning about history that doesn’t paint America in the most positive light is the exact wrong way to think and feel about history,” says Hong, the veteran teacher.

“Suppressing self-criticism and refusing to learn about and from the past? That’s what weaker countries do! Our super power as a country is that we are able to shine a light on the truth and truthfully face our history and learn from it. That is our super power,” affirms Hong.

(Editor’s note: AsAmNews receives a small commission for books purchased through the Book Shop link above) 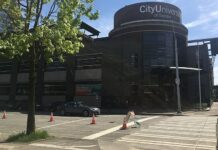