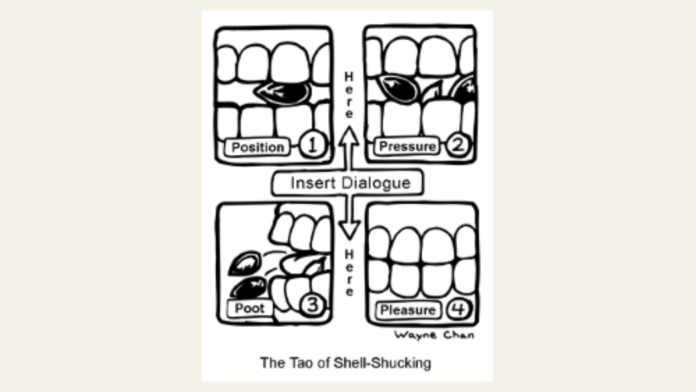 Yesterday as I was lounging about in front of the TV, I came across a scene that reminded me how resourceful, skilled, and talented we humans can be.

To be specific, it wasn’t anything I saw on television that amazed me. No, what amazed me was watching my relatives in the dining room across from me eat sunflower seeds.

You can learn a lot about social interaction simply by watching the way people eat —especially when they’re eating seeds.

Part of my fascination comes from the efficient way Asians eat seeds. Unlike Westerners, who tend to hold the seed in their hand, bite the seed to split the shell and eat the seed inside, Asians are more efficient. Asians have a patented technique whereby several seeds are placed in the mouth and via a rigorous motion between tongue and teeth, each individual sunflower seed is shucked, separated from its shell, spit out, and digested.

While this technique has been handed down from generation to generation, you can still tell that some concentration is required, simply by looking at the facial expression of the person eating the seed.

By closely observing the seed-eating individual, you will immediately find that the various parts of the face appear to be focused on different tasks. Obviously, the mouth carries the lion’s share of the work, which you can tell by noting that the person’s lips are continuously pursed, moving from side to side in a vigorous motion, except for a moment every ten seconds or so when the mouth erupts in a violent motion, ejecting the shell of the seed as if it were some foreign object invading the body.

[Author’s Note: As a point of caution, it is strongly recommended that any person seeking to observe this hull-spitting maneuver do so from a safe distance – say ten feet – and wearing protective goggles wouldn’t be a bad idea either.]

While the mouth is preoccupied with what I call the “Shell-Shuck” maneuver, the eyes have an altogether different role. During the “Shell-Shucking” process, the job of the eyes is to dart back and forth, eyebrows furrowed in a serious gaze, with an expression that suggests that there could be a surprise any moment with each individual seed.

Perhaps the eyes are anticipating that the next shell could come up empty without a seed. The technical term for this result is “Shell-Shocked.”

The variety of seeds Asians eat is impressive. Along with sunflower seeds, a typical seed-eating diet can consist of watermelon seeds, pumpkin seeds, and several other seeds I’ve never seen before.

The smallest seeds, such as the watermelon seed, create the most questions for me. In my opinion, when eating watermelon seeds, once the shell is removed, the microscopic seed is more likely to become lodged between your teeth before the tongue ever gets a chance to taste it. By my calculations, a fully-grown adult, at one sitting, could polish off the seeds of every watermelon on earth, then eat a ham and cheese sandwich, before this person might ever utter the words, “I’m full.”

Besides my fascination with my family’s sunflower eating prowess, the other part that amazes me are all the other things people can do while eating seeds. Speaking, in particular, while eating seeds, shows the true multi-tasking nature of seed-eaters.

As complex as eating a sunflower seed is without your hands, people still believe that they can manage to have an intelligent conversation at the same time.

Auntie #1 (moving to the other side of the table and refastening her protective goggles): I just think she needs to control her temper!

I wonder whether this multi-tasking can be used in other ways? I wonder, along with eating all sorts of seeds, whether this time-honored skill could be used on other products, like say, shucking oysters? I bet my aunt could open an oyster, shuck the shell, eat the meat, and maybe even polish the pearl before shooting it out with a celebratory “POOT!”

Yes, yes, I know. You could call this maneuver the ability to “Shell Fish.”