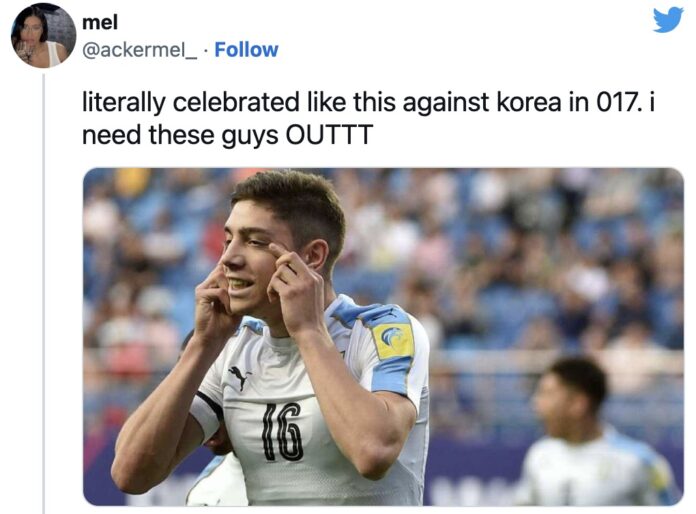 Uruguay failed to advance to the 2022 World Cup knockout stages on Friday with South Korea moving on instead. Some fans say it is karma after a photo of a Uruguayan player making a slanted-eye gesture surfaced.

Uruguay was in a World Cup group with Ghana, South Korea and Portugal. On Friday, they played Ghana while South Korea played Portugal, who had already advanced to the knockout rounds. Uruguay beat Ghana 2-0, but South Korea’s 2-1 victory over Portugal meant that the latter would advance instead.

Discussion of Uruguay’s potential elimination began on Twitter as the games entered their final minutes. One Twitter user posted a photo of a Uruguayan player Federico Valverde making a slanted-eye gesture in 2017

In the caption, the user incorrectly claimed Valverde had made the gesture against Korea. Valverde actually made the gesture during the Under-20 2017 World Cup in South Korea while celebrating a goal against Portugal.

According to the Independent, Valverde clarified that the gesture was a celebration for a friend. He said he did not mean to cause any offense a planned on writing a letter further to explain the gesture. The letter never materialized.

However, other social media users pointed out that “el Chino” can translate “the Chinese” in Spanish which would still make the gesture racist. The woman who tweeted the original photo of Valverde also pointed out that people should have the presence of mind not to make that gesture in an Asian country.