HomeAsian AmericansInaugural Hakka Conference Set for This Weekend at NYU

Inaugural Hakka Conference Set for This Weekend at NYU 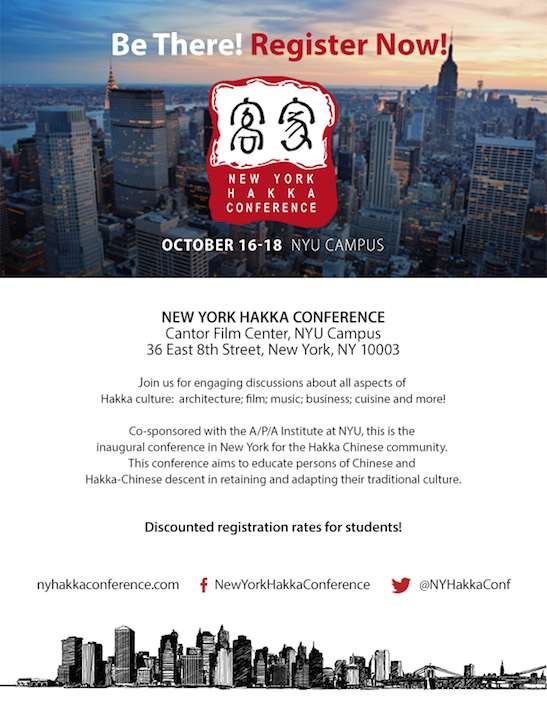 The inaugural New York Hakka Conference,Reclaiming our Hakka Heritage, co-sponsored with the A/P/A Institute at NYU, takes place on Saturday, October 17 and Sunday, October 18, 2015 at the Cantor Film Center (36 E. 8th St) on the NYU campus.

Hakkas are descendants of Central and Northern China and are sometimes called the Jews of Asia for their mass migration and pioneering spirit. Today the majority of Hakka live in Guangdong.

The opening night welcome reception will kick off on Friday, October 16, 2015 at the Museum of Chinese in America (MoCA) from 6:00pm -9:00pm. This event will celebrate and pay tribute to Jamaican musician Byron Lee. As the founder and leader of Byron Lee and the Dragonaires, Lee made the sounds and flavors of Caribbean calypso music appreciated all around the world. The New York Hakka Conference organizers will present the Hakka Achievement Award to Ms. Julianne Lee, daughter of Byron Lee. Please RSVP for the reception by today to rsvp@pantherpr.biz.

Saturday’s schedule of panel discussions include a wide range of topics such as race and culture with a screening of Paula Madison’s compelling documentary, Finding Samuel Lowe: From Harlem to China, which chronicles her search for the descendants of her Chinese grandfather. Other panels include the historical importance of the Chinese cemeteries, a session on Hakka cuisine with  author Linda Lau Anusasananan (The Hakka Cookbook: Chinese Soul Food From Around the World) and  a panel of Chinese business owners and entrepreneurs including Butch Hendrickson (National Baking Company and Coconut Bay Beach Resort & Spa, St. Lucia) and Vincent HoSang (Caribbean Food Delights).

Sunday’s schedule includes a screening of filmmaker Jeanette Kong’s documentary, Half which details the poignant story of a mixed race man raised in China who struggles to re-assimilate into American life. Also on tap for Sunday is  a study of Hakka architecture led by Prof. Ruifeng Lang; a discussion on Caribbean music and art led by record label executive Randy Chin, of the pioneering Chin family – owners of VP Records; a discussion led by Dr. Martin Tsang, Florida International University, on Afro-Chinese religious practices in Cuba; and poetry readings from the literary works of Easton Lee.

Lead by Dr. Keith Lowe, who also co-founded the quadrennial Hakka conference in Toronto, this event marks the first such gathering in the U.S.

The conference is open to the public. Discounted registration rates are available for students (with proof of student identification). Registration and a full schedule of events information can be found here.

This conference aims to educate persons of Chinese and Hakka-Chinese descent in retaining and adapting their traditional culture. It is open to all interested persons, including students and staff of New York University.

Lia Chang is an award-winning filmmaker, a Best Actress nominee, a photographer, and an award-winning multi-platform journalist. Lia has appeared in the films Wolf, New Jack City, A Kiss Before Dying, King of New York, Big Trouble in Little China, The Last Dragon, Taxman and Hide and Seek, which will screen at the Philadelphia Asian American Film Festival on November 21st. She is profiled in FebOne1960.com Blog, Jade Magazine and Playbill.com.

Family of 4 missing in California

Get your groove on with these Asian performers and beats

The Other Ones: Supporting women in Iran

Overcoming roadblocks to happiness on the job

The Tale of Traveling Tails

Family of 4 missing in California