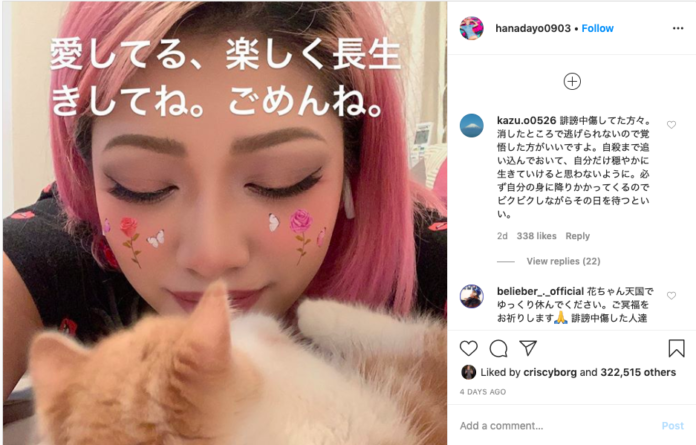 The release of the Japanese show Terrace House: Tokyo 2019-2020 has been paused following the suicide of one of its cast members, 22-year-old Hana Kimura, the Washington Post reported.

She was found dead in her bed on Saturday along with suicide notes, according to Kyodo News.

Japanese lawmakers are now mulling over ways to provide justice for cyberbullying victims.

Kimura was one of six cast members to be featured on the Tokyo 2019-2020 edition on “the reality show for people who hate reality shows,” which follows the lives of six young people living in the same house as they navigate friendships, romance, and professional pursuits. The show has gained an international cult following and has been credited with bringing reality back to reality television.

However, a slew of online harassment followed the release of the season. Although participants were warned that this was an inevitable consequence of fame, some are now speaking out against the bullying and questioning whether it should be tolerated.

“I also was slandered after joining Terrace House, and was hurt,” said cast member Emika Mizukoshi, in an Instagram post, reported CNN.

Online messages instructed her to “go and die.”

“We on TV are all human and have feelings. Words can be deadly weapons … We have to end this trend where you can say anything to so-called famous people,” Mizukoshi added.

Harassment towards Kimura rapidly increased after an episode where she lost her temper at a housemate, who accidentally shrank one of her expensive wrestling costumes in the washing machine, according to Kyodo News.

Anonymous users sent her messages telling her to “never appear on TV again,” and that “everybody will be happy if you are gone quickly.”

It is thought that misogynistic attitudes and her mixed Japanese-Indonesian heritage, which has made her a target of bullying throughout her life, contributed to the slander.

Shortly before her death, Kimura posted a photo of herself with her cat on Instagram with the caption, “I love you. Live a happy, long life. I’m sorry.”

On the day of her death, she wrote on Twitter, “Nearly 100 frank opinions every day. I couldn’t deny they hurt me. ‘Die’, ‘you are disgusting’, ‘you should disappear’ I believed these things about myself more than they did. Thank you, Mother, for the gift of life. My whole life I wanted to be loved. Thank you to everyone who supported me. I love you all. I’m sorry for being weak.”

Kimura, who was also a rising professional wrestler in the Japanese promotion World Wonder Ring Stardom, was mourned by wrestlers and sports fans around the world.

“There are no words that could possibly heal this wound,” wrote former UFC and WWE champion Ronda Rousey on Instagram. “Cyberbullying is a very real and growing threat to us all as a society … Even a straw’s weight can be the one to break a camel’s back.”

Another wrestler, Sü Yüng, wrote, “I will always love and miss you, my friend. You are my little sister.”

Kimura joined Stardom in March 2019. In the course of one year, she became the Goddess of Stardom champion and a two-time Artist of Stardom champion. She was also the winner of the 5 Star GP tournament and a recipient of the Fighting Spirit Award.