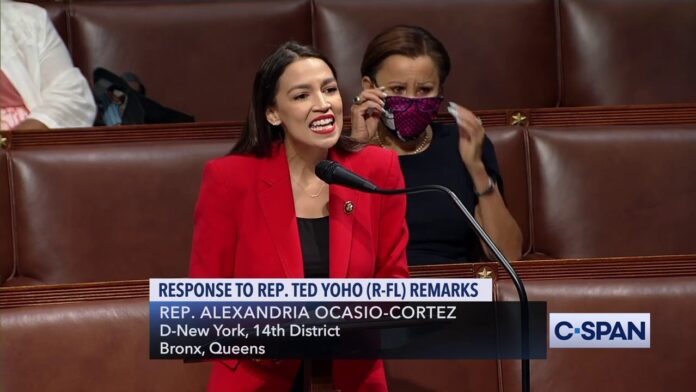 Led by New York Congressmember Alaxandra Ocasio-Cortez (D-NY), Democratic women of color made it clear that they will no longer be quiet about the bullying and harassment that they experience because of their gender. But she was not alone.

About 10 other women followed her recalling the abuse that they suffered as members of Congress. Immediately after Ocasio-Cortez eviscerated Rep. Ted Yoho, (R-Fla.), Washington’s Rep. Pramila Jayapal (D-WA) delivered her own powerful speech.

Ocasio-Cortez called out fellow Congressmember Ted Yoho, for calling her a “F***ing b***h,” on the Capitol outside steps, The Hill reported.

“This issue is not about one incident,” said Ocasio-Cortez. “It is cultural. It is a culture of lack of impunity, of accepting of violence and violent language against women and an entire structure of power that supports that,” she said.

Ocasio-Cortez said she initially was going to shrug off the incident but changed her mind when Yoho brought up his wife and two daughters in his non-apology. “I’m not going to apologize for something I did not say,” he said Wednesday.

“I do not need Rep. Yoho to apologize to me. Clearly he does not want to. Clearly when given the opportunity he will not & I will not stay up late at night waiting for an apology from a man who has no remorse over calling women & using abusive language towards women.”

Another lawmaker who called on Yoho to apologize was Indian American Rep. Pramila Jayapal, who said the use of the B-word against women became more prominent in newspapers and national discourse after women gained the right to vote in 1920.

Jayapal, who has faced personal attacks of her own from GOP members, followed AOC with a powerful speech of her own, condemning the sexist culture that women, particularly women of color, still face.

“And that was just a little too much power for too many men across the country,” Jayapal said. “And so, all of a sudden, that word rose in prominence because God forbid that women would have the right to vote, that we would have power in this body, that we would have power anywhere in this country. God forbid that women would actually have a voice to speak out on issues that mattered and be the arbiters of what is fair and right and spoken with dignity and truism.”

“These are the things that happen to us all the time,” Jayapal said on the floor, noting out of the 11,000 people who have served in Congress, only 79 are women of color.

“And to everybody that is out there watching us, and to our colleagues across the aisle, let me say this: We are not going away,” said Jayapal, co-chair of the Congressional Progressive Caucus. “There are going to be more of us here. There is going to be more power in the hands of women across this country. And we are going to continue to speak up.”