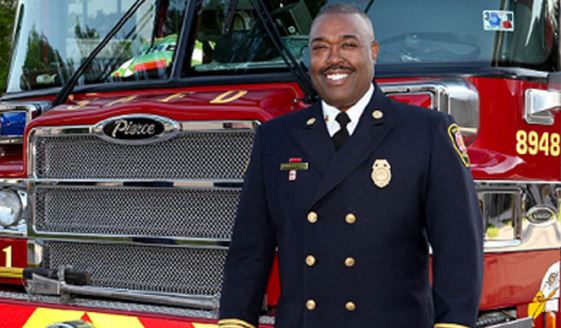 The investigation of San Antonio Fire Chief Charles Hood for posing with a nude woman covered in sushi is being blasted by a sushi chef.

“Nothing derogatory about it,” said sushi chef Goro Pitchford to KSAT. “It’s more of a celebration. It’s very traditional for higher-ups, you know, for higher-ups in Japanese community back in the samurai days.”

The photo was taken at a private party in January, but did not come to light until this month.

The San Antonio Express posted video of the party showing Chief Hood next the model.

Hood explained to the Express how the photo happened.

“You walk in the front door and there’s a sushi lady there that I guess is a business, so I stopped and posed and take a picture. That’s it,” Hood said. “It would be like me taking a picture with a flamenco dancer in Vegas or a Spurs dancer at Top Golf where the Spurs dancers happen to be there.”

Others, however, disagree. One Japanese American woman phoned KSAT to say she’s never heard of the tradition and finds the episode offensive.

“I have directed the City Attorney to conduct an independent review of all the facts and circumstances involving the photograph and the event. This is a serious issue and I’ll take whatever action is warranted. We all have to be aware that our actions outside of the workplace – good, bad or otherwise – reflect on our entire organization.”

“The scene in the photo — and the disrespect of the woman in the photo — betrays the standards and values of the City of San Antonio,” Nirenberg said in a statement. “I support the city manager’s decision to conduct a thorough, independent review to learn the full set of circumstances and determine the appropriate level of discipline.”

Hood has apologized to anyone offended.