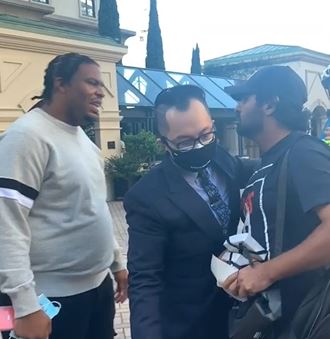 Umi, a sushi restaurant in Atlanta, Georgia, is being accused of racism after refusing service to a Black couple over a dress code violation, reports Eater Atlanta.

Kaylan Colbert and her husband William Johnson say that Umi’s management told them that Johnson’s sneakers violated the restaurant’s dress code. The couple protested after noticing that a White customer at the bar was also wearing sneakers.

“If you’re going to have rules they should apply to everyone and not just some people,” Colbert told Fox 5 Atlanta. She also says that her husband had worn sneakers to Umi previously without issue and that this was the first time the dress code had been verbalized to them.

The incident first drew attention after Colbert posted a video of the confrontation to Instagram.

The couple can be seen pointing out another customer’s sneakers in the video and arguing the enforcement of the dress code with restaurant staff.

“I get where you’re coming from, but please, we’re all minorities here,” one of the staff members said.

The situation escalated when Umi owner Farshid Arshid, who is Iranian American, got involved. During the exchange between Arshid and Johnson, Arshid can be heard threatening to call the police, stating, “He’s going to go to jail tonight.”

“You’re a zero, that’s what you are,” he said to Johnson.

The confrontation was broken up by the restaurant staff and local security.

Arshid says he regrets the way he handled the situation.

“We should never have engaged with each other. I feel ashamed about that. We as the restaurant should have deescalated the situation,” he said. “This was 100 percent an operational failure by us and by me. When I got engaged, I should have investigated it.”

He says he has also contacted the couple to apologize.

Colbert and Johnson have yet to accept Arshid’s apology.

Social media users are now calling for a boycott of Umi following the incident.