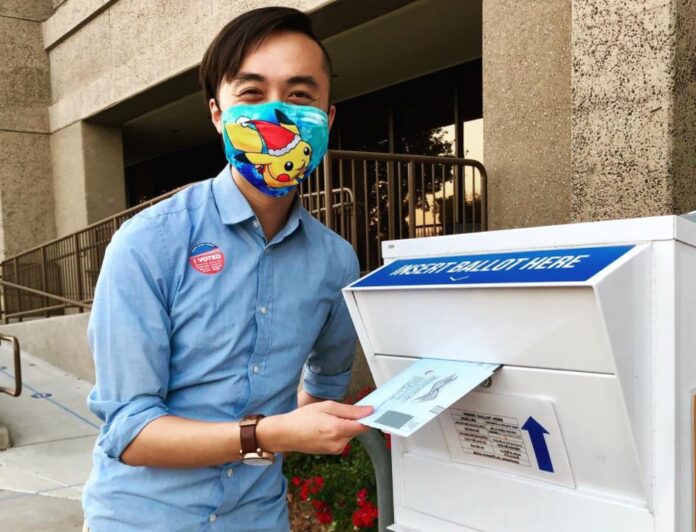 Photo by Alex Lee for State Assembly 2020 via Facebook

After Tuesday’s election, Alex Lee (D-CA) from San Jose has just won a seat in California’s Assembly, KTLA reports. At 25 years old, he is the youngest to join state legislature in over 80 years.

Lee won an astounding 73.1% of the district’s 104,538 votes for District 25 against Bob Brunton (R-CA), according to San Jose Spotlight. The 25th state assembly district includes Fremont, Santa Clara, San Jose, Milpitas, and Newark. Lee fills the seat of Kansen Chu (D-CA), who endorsed him during his campaign.

What’s more, several qualities in addition to his age make him a unique candidate. Describing him as a “Generation Z Democrat”, the Los Angeles Times says Lee lives with his mom, and worked delivery part time to raise funds during his campaign. Once he is sworn into office, he will also be the first California legislator to have come out as bisexual.

“Those facts could have easily been an obstacle during my campaign,” Lee told the LA Times. “Instead, I highlighted what made me different from other lawmakers. All of this combined will make me an effective advocate.”

This, in addition to his previous roles, has won over voter support throughout the Bay Area. Previously, Lee was student body president at UC Davis. He studied communications and political science. He also interned for former Congressman Mike Honda (D-CA) and other California legislators. According to his official campaign website, he also worked in the state capitol. Here, he drafted key public safety, education, housing, and senior-related legislation.

Following his success earlier this week, Lee thanked his supporters on Facebook and Instagram, reflecting on their journey together:

“From the start, we were discounted as the underdog… In a landslide victory, we have prevailed. As a first-time corporate-free candidate, we conquered the odds and secured a major victory for our future,” he wrote.

“Our victory challenges the presumption that politics must be done in a certain way and limited to particular groups of people. With immense humility and gratitude, let’s celebrate this major victory! Because the real work is about to begin.”