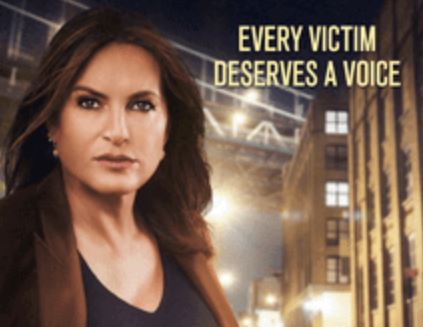 Law & Order: Special Victims Unit began its 22nd season addressing racism and the uneasy relationship between the public and the police in New York City due to systemic racism, but that’s been limited to a binary of Black and White. This week’s episode, Turn Me on Take Me Private seems to be the perfect setup for addressing racial stereotyping of Asian Americans and the hate crimes against Asian Americans in New York, but Asian American racism is totally ignored.

Ripped from the Headlines

In the season opener,  Guardians and Gladiators, a White woman, Colleen Reynolds (Carolyn Baeumler), yells at a Black man, Jayvon Brown (Blake Morris),  who is filming her on a cellphone. Brown got too close to her son and Reynolds calls the police. After the police arrive, the boy runs into the brush for his ball and finds a barely conscious man who has been raped. Reynolds accuses Brown and the officers arrest him.

By the time Captain Olivia Benson (Markiska Hargitay), the head of SVU, comes on the scene, the ambulance is there and the officers report there are outstanding warrants on Brown. Brown informs Benson the warrants are related to Black Lives Matter protests. Brown is soon eliminated as a suspect in the rape, but he files a lawsuit against Benson and Sergeant Odafin “Fin” Tutuola (Ice-T) as well as the other detectives involved in his arrest.

Daniel Velasco (Filipino) plays the victim Mark Peter Aquino, a gay Filipino man who was raped. His story is tied up at the end of the episode, but the Jayvon Brown story is a continuing arc.

The title comes from the internal affairs investigator, IAB Captain Renee Curry (Aimé Donna Kelly), who tells Benson that cops tend to be either overly aggressive gladiators or well-intentioned guardians. Neither of whom see their complicity in systemic racism. Benson is a guardian, but she has some things to learn and unlearn.

Guardians and Gladiators draws inspiration from the 25 May 2020 incident where a White woman, Amy Cooper, called the police on a Black man who was bird watching, Christian Cooper (no relation) in the Central Park area known as the Ramble. Instead of a child, Amy Cooper had unleashed her small dog. Amy Cooper called 911. The Central Park incident occurred on the same day as the murder of George Floyd. Amy Cooper has since been charged and arraigned with filing a false police report.

Turn Me on Take Me Private

In the fifth episode of Season 22, Turn Me on Take Me Private, Eva Noblezada plays a cam girl who calls herself Kendra, but is actually named Zoe. Zoe is many things. She’s a grad student in social work. She volunteers at a Catholic food bank. She’s a good daughter: Her father has Alzheimer’s and needs to be in a nursing home specializing in care of dementia (a memory care ward).

Pre-pandemic, she worked retail, but being a cam girl is how she now pays the bills and Medicaid has yet to kick in to help her pay for her father’s care. For her one-year cam work anniversary (“cam-iversary”), Kendra has a spin the wheel with all of her top requests. A spin brings up role play. Her viewers make quests with tokens. The highest bidder wins and the winning scenario is a rape fantasy.

The night of the rape fantasy,  as Kendra is pretending to speak to a rapist just out of view of the camera (“Please don’t hurt me. I’ll do anything you want, anything you say”), a masked man comes in through an open window and digitally rapes “Kendra.” A concerned viewer, one of Kendra’s fans, records the rape and comes into NYPD. He’s an older White man going by the moniker of TenInchNail and he knows that Kendra must be in the New York area.

Going to the company, Sugarfap, the detectives learn from the owner, Mr. Coogan (John Waters), that during these COVID-19 times, “those who can’t adapt are doomed” and now the cam workers include “sex workers and strippers who couldn’t make a living.”

Kat complains that “the point is that the woman controls the narrative,” and that makes cam work more empowering,  but Fin says, “Sex work is far more dangerous than people want to believe.”

When Kendra privately speaks with her fans/viewers, she discovers ShyGabe, a “monogamous user” was enacting a rape fantasy. ShyGabe is a certified paralegal and he will defend himself in court.

With Eva Noblezada as the principal guest star, that topic would seem unavoidable. Noblezada played the modern version of Madame Butterfly in the Broadway revival of “Miss Saigon” for which she received a Tony nomination.

SVU could have easily have resurrected George Huang, if not in person, via Skype or Zoom. In the third episode (Remember Me in Quarantine) Benson gets a request from an Italian police department this way. SVU, despite some questionable face mask choreography, exists in a COVID-19 world.

SVU had been remarkable in its inclusive casting. Ice-T has been with the series from the beginning as Fin. In the eighth season, the cast included a Native American detective, Chester Lake (Adam Beach) from 2007 to 2008. Benson had been partnered with Nick Amano (Cuban American Danny Pino) from 2011-2015. Currently Katriona “Kat” Tamin is played by Jamie Gray Hyder who is Lebanese on her father’s side. Raul Esparza played ADA Rafael Barba from Season 14-19 with guest appearances this season and last season. Demore Barnes came on as Deputy Chief Christian Garland in 2019 (recurring).

In a twisty convoluted way, Season 22 was able to bring in systemic prejudice toward Black men as a theme for this season.  However, although it has already featured Asian American actors this season, it has not addressed the growing concern about hate crimes. Asian American hate crimes are on the rise in New York City due to the pandemic. So much so that in August of this year, the New York Police Department announced the formation of the new Asian Hate Crime Task Force which includes 25 officers of Asian American descent who all speak a second language.

This season, the first episode, Guardians and Gladiators, the victim was a gay Filipino man, Mark Peter Aquino (Daniel Velasco). In Episode 4 Sightless in a Savage Land, the perpetrator of the sex crime (statutory rape) was an Asian American man (Indian American actor Bhavesh Patel as Ajay Sharma).  While the Asian American man is killed half-way through the episode, his wife, Rani (played by South Asian American Lipica Shah) and her troubles are totally ignored. Considering the nature of her husband’s crimes, Rani could have been the target of aggressive online misguided activists. That’s an opportunity to address hate crimes, particularly hate crimes toward Asian Americans.

This week’s episode, Turn Me on Take Me Private,  which airs on 14 January 2021 on NBC, centers on an Asian American woman but almost totally ignores her ethnicity. We know from the OK Cupid study, race is an issue in dating. The episode seems like an opportunity missed to take the issue of racism beyond Black and White. In Season 22, a Black man can be a victim of racism, but Asian American victims and perpetrators are not seen within the context of race. This seems to be color blindness gone wrong.