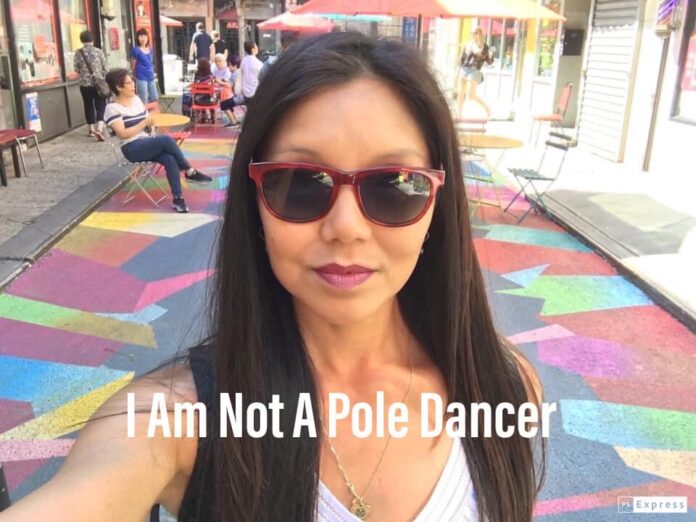 I was not quite presentable, so I didn’t turn my camera on and apologized for it. Then one of the men, a committee member in the meeting said to me, “Don’t you have your pole dancing clothes on?” I was shocked, but merely responded back, ‘Not today.” “Ugh,” I said to myself.

Pole dancers are scantily dressed or barely. Is this how this man sees me or wants to see me? In a town meeting? WTF? His remark was clearly lewd, offensive and sexist. To him, I was not seen as an equal to discuss town matters, but a pole dancer. I did not want to hear such sexually suggestive comments in future meetings, so I was going to take this on and let everyone that heard his offensive comment know I was not having it.

While I was bothered by the lewd and sexually offensive reference, I could have reacted angrily and called it out right then and there, but instead what I wanted to do was document it in an email, and of course to ask for an apology. If I settled the incident at the start of the meeting and rather too quickly, it would not have made an impact in changing his male brain nor create awareness of the sexual objectification of women.

I didn’t know exactly who said the offensive comment as I was adjusting my laptop and charging wire at the same time, but I did take a glance and knew it was one of three specific men. There were seven of us at the meeting and I was the only female in attendance. Sometimes there are more people in the meeting and other women too, but not this evening.

I know some of you are reading this and shouting, “Off with his head! That was racist! Get him fired!” Well, this man’s position in the meeting is not a paid position, but he is definitely representing his town. As for the comment being racist, I don’t believe it was, maybe?, but I do believe it was sexist. Would he have said this to me if I was not Asian? I’m not sure. Perhaps he’s just another dirty old man.

I knew I would hate myself if I let this slide. I am not a new face coming into this meeting. I have been there since 2006, so I was definitely going to send my email to everyone in the meeting as well as the Mayor, Deputy Mayor and Township Administrator explaining what happened. It was my call to action. I had to call it out and shut this behavior down…for all women. I also asked for an apology from that committee member that made the lewd comment.

Women experience sexual harassment daily from men that don’t think their words or actions is sexist, hurtful or suppressive. Take a look at New York’s Governor Mario Cuomo. He is dealing with sexual harassment accusations right now and posted an official statement. He apologized that he thought his playful jokes and teasing was good natured and not meant to hurt. It’s through education that men need to learn how to treat women with respect, but it has to be called out. I certainly don’t need to be suppressed by men thinking I am or should be a pole dancer during a town meeting, but rather to be seen as an equal.

Not too long after my email was sent, my friend who led the meeting and was copied on the email apologized to me because he didn’t even think much of the comment when it was said and for that he was sorry. Sadly, my friend was totally oblivious to the lewd comment because he is a guy with a male brain.

Playful and seemingly innocent, but inappropriate comments about women is way too rampant among men. They have accepted it among themselves as playful teasing, which is why they aren’t even aware of what they say and this man said it during a town meeting. They don’t realize their harassment towards women until they are called out and that’s what I did.

As I was writing this I received an email from the committee member that made the lewd comment. He apologized and acknowledged that what he said was insensitive and inappropriate. I accepted his apology and wrote to him this is a learning moment for him. Now he’s woke and hopefully feeling shameful too.

Later, I received an apology from the township administrator on the town’s behalf acknowledging the comments to me were unacceptable. She offered a meeting with the Mayor and Deputy Mayor to discuss the matter. I’m sure it’s a wake up call to all of them and if I rattled some nerves, then good. I replied back and accepted their apology, but declined a meeting. I explained how my calling this sexist and offensive comment out was to support all women, not just for myself. I told her I hoped this would be a learning opportunity for all men to be cognizant of their behavior towards women especially while representing the town.

I would like all women to be courageous and stand against all forms of harassment. If they are afraid to do that on their own, I hope they will ask a friend to help. In life when we face an obstacle, we want solutions and shouldn’t let the problem continue to perpetuate. In the same way, we certainly should not allow any forms of harassment continue to be acceptable, even as a joke.

As an Asian American woman, we’ve been sexualized in all forms of imagery, which has led to condescending mistreatment. I want women to be seen as smart, capable and strong, because that is who we are. Let’s stomp out the sexual harassment and call it for what it is. We must use our strong voice and not think twice in letting an opportunity go by to educate a man that what he said or did is inappropriate. When you call out sexist behavior, you are doing a world of justice for all women.