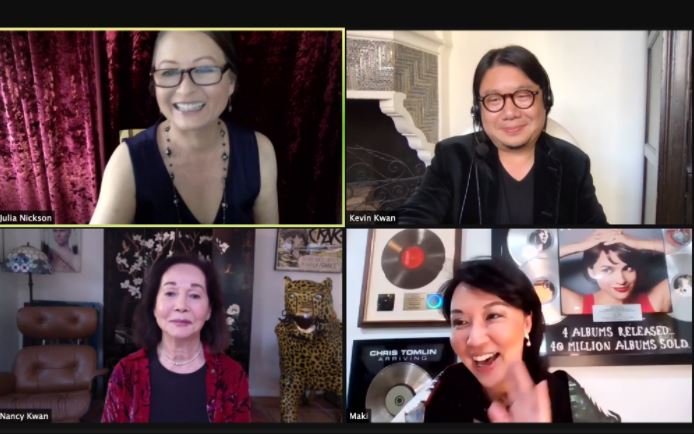 It’s a perfect early summer evening in June for a casual outing with a few friends at the local watering hole. Come as you are–”very informal, honey!” exclaims supercool actress and model Julia Nickson as you enter the room.

We’re here to talk story, relive the good old days. “Did you know Vidal Sassoon himself cut my hair into that (now famous) bob for the Vogue magazine photo shoot?” offers Nancy Kwan–yes, that’s THE Nancy Kwan of Flower Drum Song fame chiming in and laughing.

“I was playing a game of chess at the same time!” We learn that her Vogue appearance made such a big splash it in turn helped to launch Sassoon’s fabulous career and uber-lucrative dynasty of products. We wallow a bit in some of the not-so-good times of Hollywood’s exclusion and marginalization of Asian American stories and talent–”there are times in our career you think you will never, ever, act again,” Julia laments while Nancy nods along. We linger long enough to enjoy some glorious tea spilling and name-dropping (including this year’s Asian Hall of Fame inductee, which at press time is still a trade secret!) By the end of the night, we dare to revel in the future of literature, art, performance, and the Hollywood that may yet come.

We’re still tramping our way out of the pandemic so of course this happy hour is in actuality a webinar on Zoom, and you are not in fact friends with the iconic Nancy Kwan and the Julia Nickson of Rambo: First Blood Part II fame, nor is our gracious host, Crazy Rich Asians novelist Kevin Kwan, buying you drinks. But, it sure feels like you are getting together with long-lost pals to reminisce about their heady days breaking into mainstream Hollywood as Asian American actors, and to dream about an emerging era in which Asian Americans are beginning to accrue real power to create the narratives and roles we deserve, greenlight and fund new projects, and even lead networks, studios, and publishing houses.

Maki Hsieh, CEO of the Asian Hall of Fame, the event’s organizer, beams, “this is the first time the Kwan cousins are on Zoom together!” introducing host Kevin Kwan, an Asian Hall of Fame inductee, as among Time Magazine’s 100 Most Influential and a member of the Singapore branch of Nancy’s family.

“Did you even know you had cousins in Singapore?” he teases her, adding, “Nancy, you were a mythical character to me growing up. I must have been seven or eight years old when we all gathered in the living room to watch a Singapore television broadcast of Flower Drum Song. You came out in that fan dance scene and all my relatives went crazy! You have the ‘Kwan’ look, my grandmother proudly noted.”

Elementary school-aged Kevin probably didn’t yet have an inkling of his future as a world-famous novelist, but the seeds were being planted: cutting through the grounds of lonely Tyersall Park with his father on walks to the Botanic Gardens, an impressionable encounter with an extravagant film telling an unapologetic Asian American story starring an exuberant Asian cast.

Kevin then says to Nancy what we are all thinking about the first major Hollywood film with a predominantly Asian American cast and storyline, “you stole the entire film.”

Nancy Kwan forged a groundbreaking career after that 1961 film, just as she yearned to forge her own unique life. “I was always adventurous,” she shares, “imagine, being excited to head off to boarding school at twelve!”

Kevin prompts Julia to regale us with a few of her adventures, including how she had to call California from a payphone on a sketchy access road to Oahu’s Sand Island (an area used briefly to incarcerate Japanese Americans immediately after the bombing of Pearl Harbor) to find out if she got the Rambo part. Nickson stars in Hong Kong Love Story, a romantic comedy currently in post-production.

“What was it like growing up as a Eurasion in Singapore in the 1960’s and 70’s?” Kevin asks Julia, who has mixed heritage. “Ooh, everyone stared at you, especially the men. Sometimes they would just point at you and say, “eyes!”

Kevin Kwan’s latest novel, Sex & Vanity, features a mixed-race heroine, “the daughter of an American-born Chinese mother and a blue-blooded New York father,” whose romantic struggles are also entangled with her internal conflicts over her racial and cultural identity. Kevin acknowledges criticism of his CRA trilogy and the eponymous film’s uncritical representations of race, class, and gender. Still, we can’t help but celebrate the new horizon that both the novels and film seem to have opened for Asian American cultural relevance.

Julia says, “you have so much to do with that opening up awareness and appreciation of Asian actors, Kevin. And CRA has increased the visibility of Asian American actors so much. You only made two mistakes: Nancy and I weren’t in it!”

AsAmNews has Asian America in its heart. We’re an all-volunteer effort of dedicated staff and interns. Check out our new Instagram account. Go to our  Twitter feed and Facebook page for more content. Please consider interning, joining our staff, or submitting a story or making a contribution