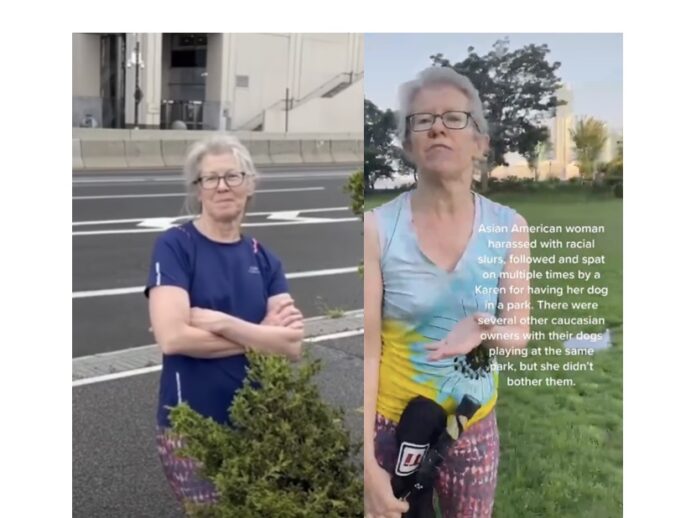 It appears to be the same woman in both videos.

The first video was posted on July 5. An Asian man films the woman as she berates him for not putting his dog Boba on a leash.

“Y’all got a leash yet?” the woman says in the opening of the video.

The Asian man filming the woman suggests that she has made racist comments.

“Which country should I go back to, Karen? Say it,” he asks. “Cat got your tongue?”

The woman then begins to clap her hands and walk towards the street while calling the dog. Another woman passing by notices and criticizes the White woman.

“You’re actually instigating a dog to go to the middle of a highway? What kind of problem do you have, lady?” the second woman asks her, according to the Daily Mail.

“You insult someone of Asian descent …” she continues. “Why don’t you go back [to] where you came from? Who are you? Leave people alone.”

The same woman appears to also be the subject of a viral TikTok video posted on July 8. She criticizes the Asian person taking the video for not putting her dog on a leash.

In the captions, @mk__ml11 explains that the woman spat on an Asian American woman and called her racial slurs. The TikTok user explained that several Caucasian dog owners in the park also had their dogs off-leash but the woman did not bother them.

The woman has yet to be identified.