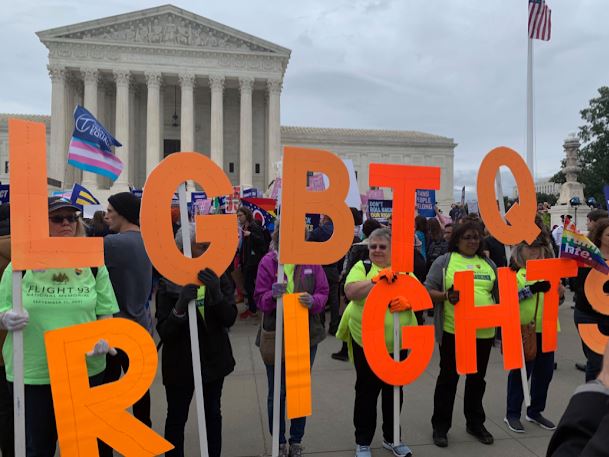 In a 6-3 landmark decision, the U.S. Supreme Court ruled that federal anti-discrimination laws protect gay and transgender workers from job discrimination in a trio of cases consolidated in Bostock v. Clayton County, Georgia.

“For the past few weeks, the LGBTQ+ community has been fearfully awaiting this decision. Today, we celebrate this historic ruling and the progress we have made toward equality under the law. The Supreme Court has officially affirmed that LGBTQ+ Americans are protected from discrimination in the workplace,” said Rep. Mark Takano, who in 2012 became the first openly gay person of color elected to Congress.

In the surprise decision, the U.S. Supreme Court ruled Monday that the 1964 Civil Rights Act protects gay, lesbian, and transgender employees from discrimination based on sex. The ruling was 6-3, with Justice Neil Gorsuch, Donald Trump’s first appointee to the court, writing the majority opinion. The opinion was joined by Chief Justice John Roberts and the court’s four liberal justices.

“Today,” Gorsuch said, “we must decide whether an employer can fire someone simply for being homosexual or transgender. The answer is clear.” He found such discrimination is barred by the language in the 1964 law that bans discrimination in employment based on race, religion, national origin or sex.

The National Asian Pacific American Bar Association (NAPABA) applauded the Supreme Court for affirming the rights of LGBTQ individuals, and that they cannot be discriminated against with respect to their employment based on their sexual orientation and gender identity.

“NAPABA has and will continue to be supportive of LGBTQ equality,” said Bonnie Lee Wolf, President of NAPABA. “We recognize that there are legal, cultural and social issues specific to the LGBTQ community. We are pleased that the Supreme Court recognizes that discriminatory employment practices due to a person’s sexual orientation and gender identity have no place in the workplace.”

“The laws have a significant impact on the Asian Americans community because so many of us are LGBTQ.” said Glenn D. Magpantay, Executive Director of the National Queer APIA.

In a statement, the NQAPIA said: “This is a watershed moment for the LGBTQ community. The decision will directly impact 1 in 3 (or 5.2 Million) Asian Americans who live in one of 30 states and are at risk of being fired, refused housing or denied services simply because they are LGBT.”

AAPIs are the nation’s fastest growing racial group in the United States today. A survey by Asian American Legal Defense and Education Fund shows that a majority of Asian Americans support laws protecting gay and transgender people from discrimination in employment, housing and public accommodations.

The High Court’s decision is a setback for the Trump administration, which sided with the employers in these cases, and has used its rule-making power to issue new directives that take away previous protections for transgender individuals.

“Attacks by President Trump and his administration on LGBTQ+ rights are persistent,” added Takano. “They have threatened the safety, health, and financial well-being of our community by rolling back non-discrimination protections in healthcare, employment, housing, adoption, education, and the list goes on. Under the guise of religious liberty, the Trump Administration has sanctioned discrimination against a community that already suffers disproportionately from high levels of poverty, lack of access to healthcare, homelessness, and violence.”

Speaking to reporters, Trump said of the ruling: “They’ve ruled and we live with the decision of the Supreme Court.” He called the opinion “very powerful,”